The Socialist Case for Blockchain 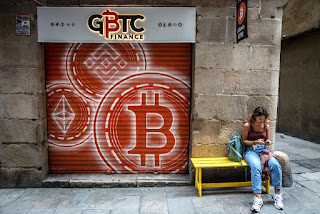 Doug Belshaw points to a recent article in the Jacoban in the form of a review of Vitalik Buterin's Proof of Stake: The Making of Ethereum and the Philosophy of Blockchains saying there is no socialist case for crypto. The argument in the Jacoban review is that whenever the question of social good comes up, Buterin switches from a discussion of politics to a discussion of technology, which is insufficient.

The book is helpful, but not exactly in the way Buterin thinks. It reveals how Buterin’s case is wholly, shockingly bereft of a political vision to achieve such a society, let alone a vision rooted in the most basic political and moral principles of the Left.

The true value of reading this book is not simply observing the clear and repeated ways in which Buterin and crypto have been unable to deliver on their promises; the value is seeing how the unintentional high priest of (supposedly) leftist Ethereum vibes has a disinterest in — if not disdain for — politics of any sort.

I can see the Jacoban's point. Because socialism is a political and moral philosophy, any socialist argument must be founded on these principles.

It also doesn't help that

the crypto discourse has been one of the least helpful, scammy-on-all-sides locales in all of contemporary society — doubly so if you’re a curious citizen trying to get clear answers about the political underpinnings of crypto and its supporters.

Buterin has been sufficiently ground down by human reality: “More damningly, in practice it seems like people, at least in their capacity as crypto-token holders, are profit maximizers, and seem to see nothing evil or selfish about taking a bribe or two.”

I'll concede both points to the Jacobin. There is a clear sense in which blockchain (in general) and crypto (in particular) attempt to supersede the discourses of politics and morality, and there is no doubt that crypto and blockchain have been a hotbed for scams and questionable practices.

It doesn't follow, though, that there is no socialist case for blockchain (in general) and crypto (in particular).

Others have made the case. Huckle and White, for example, point to a series of problems in traditional payment systems that are addressed by blockchain technology all points are direct quotes:

You get the idea. Traditional finance is rife with the problem of bad actors. There is a deep literature documenting how financial systems are manipulated and distorted in order to benefit the wealthy (and the would-be wealthy) at the expense of the greater mass of more moderate and more honest people.

Indeed, it is arguable (and I would argue) that most, if not all, of the dishonesty around crypto-currencies are artifacts of the traditional finance system whereby individuals employ mechanisms of manipulation and fraud to separate people from their traditional cash-based money. The issues surrounding crypto are issues inherent in existing financial systems; they are not unique to crypto.

Bad actors make financial systems work for them, and in turn, this helps them make moral and political systems work for them as well. They are able to distort moral and political discourse to their advantage. If we have learned anything from the Trump era it should be this: institutions based on morality and politics are uniquely vulnerable to bad actors who disregard morality and politics. Systems, in other words, that are based on the idea that everyone will do the right thing are vulnerable to people who willingly do the wrong thing.

To take this argument one step further: this failure is based on the nature of moral and political discourse. To a large degree they are rationalist and cognitivist discourses. They provide arguments based on foundational premises (such as the equal value of all humans) and reason and logic to recommend points of policy (such as equal justice before the law). Their long term success depends on the idea that we can trust people to be good and reasonable.

That trust is misplaced, and in today's connected and global society when individuals who reject these foundational premises and dispense with any pretext to logic and reason can cause massive social harm. It takes slight effort to point to instances of a Trump or a Putin or a Musk or a Bezos to illustrate this case. You can't depend on morality and regulation to manage people who with the shrug of a shoulder can dispense with morality or regulation.

The socialist response to the problem of trust (and to some other related issues I haven't discussed here) needs to be a structural response. And that very much means a technological response, much as the politicians and the moralists push back against it.

There is no shortage of cases where structure and technology have preceded politics and morality. Indeed, the dominance of capitalism as a political and moral theory has almost nothing to do with politics and morality, and everything to do with the physical and technological structure of society. The very idea that the means of production and (especially) economy and commerce are owned commits you to a capitalist system.

The fundamental technological advance of blockchain (in general) and crypto (in particular) is that it removes the element of ownership of social and financial systems. It does for economic systems what language did for cultural and social systems: it creates a common (and not owned) mechanism for transactions and exchanges of all kinds. And that to me seems to be right at the heart of socialism.

This rephrasing changes the key question from one of 'how can we take ownership of the means of production?' to 'how can we create a common mechanism for transactions and exchanges of all kinds?' And that does take us into the technological discussion that Buterin tries to offer (and one that, in my own way, I try to offer as well).

For example, consider one very simple non-crypto case: the transition from centralized (and owned) social networks to the decentralized (and unowned) fediverse. I talked about that last week.

The moral and political discourse centres around the question of whether we should have a centralized social network infrastructure that can be owned by the likes of Elon Musk. What is the socialist response? That we should not? That the centralized social network infrastructure should be tightly controlled and regulated? That it should be owned by and managed by the government? None of these responses is even remotely satisfactory. I mean, sure, these responses are probably better than just letting Elon Musk run the show. But only marginally.

The actual best response is to have a decentralized social network infrastructure (somewhat) along the lines of the fediverse. To have a social network based on common protocols that can form and evolve like language, that nobody owns and that everyone can create. Protocols that can, like grammar, be whatever you want them to be. And instances that can be built and managed by individuals, collectives, governments, whatever.

The problem is that nobody can actually imagine how such a decentralized fediverse might work, how it can be set up so individuals can genuinely participate in such an environment (how they can control their own identity, manage their own content, etc. etc.). And now this becomes a technological problem. And it is here that (some) blockchain and crypto technologies come into play. Establishing a mechanism for self-sovereign identity, for example, so the same person can move freely from one fediverse instance to another.

One more thing, to conclude:

Consider inflation. My colleague of years ago Jim Stanford said on CBC this morning that the idea of market-based solutions is so entrenched in the minds of policy-makers that they can think of no other remedy for inflation than to increase interest rates, despite the social harm it will cause, because that's the only market-based mechanism to combat inflation. But surely there are non-market based approaches to inflation, such as (for example) making pricing a decision that is made by consensus, rather than established by fiat by the owners of a resource. But how to do that? We need a technology that makes it possible.

Consider racism. It is argued (convincingly, to my mind) that racism is structurally entrenched; that's one of the core tenets of critical race theory. There's a shrill response from non-socialist voices against the idea, so much so that they want to forbid even discussing the idea in (say) schools. But if racism is indeed structurally entrenched in society, then a moral or political response to racism will be quite inadequate; but what would a structurally non-racist society look like? That's a technological question.

When we understand that the structure of society is weighted against socialist philosophies and approaches, the appeal of blockchain becomes more evident. For example

Broadly speaking, blockchain could serve socialists in two ways. The narrow option is to use blockchain technologies to better organize...

But beyond that, blockchain might also be useful to build a socialist economy. Adrian mentions a hypothetical case in which the government might be able to distribute housing through blockchain and cryptocurrencies.

Or, for example, imagine a political budget decision-making system based on a consensus mechanism, rather than power (and paid-for) politics.

Indeed, framed this way, the moral and political discussions feel like a pointless distraction. Instead of just talking and theorizing about socialism, these technologies give us a way to actually do it.

Right now,. the mechanisms for good decision-making are broken. And we know this.

And yet, even though the defund movement lacked faith in government officials, it expected them to be the ones to ratify its agenda. By placing representative democracy at the center of its vision, the movement overlooked alternative forms of democratization more appropriate to fulfilling its stated agenda.

And that's where the error lies in the Jacoban's argument. They want the science to reflect their own moral and political philosophies. But conversely, I believe that, ultimately, the making of good decisions leads to something like a socialist moral and political philosophy. Because I believe things like personal freedom and autonomy, social diversity and equity, etc.etc., makes for better decisions. But for me it isn't dogma. It doesn't begin with socialism. It ends with socialism.