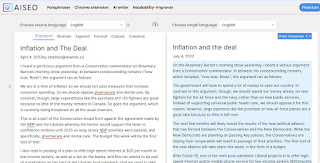 I wrote an article yesterday. It was a political article, but what I said isn't the point here.

This post reports on my use of the article to test the AISEO Paraphraser. It was, to say the least, a miserable failure. Here's the original 500 word article. And below, after this post, is the 600 word paraphrase.

Some of the howlers:

- it said there would be no money left over after the F-35 purchase, instead of saying the money would mostly be spent outside Canada

- it represents the broadband internet access program as an anti-Covid measure, which it is not

- it suggests that the Conservative repsonse is to say "tax the banks!" which it most certainly is not

I got a response from the developer on Product Hunt:

For Factual content, I would highly recommend using the Formal mode. Let me know how it performs with Formal mode

I'm sorry to say it's even worse. It inserted a number of factually false statements into the article (for example,  "The number of COVID-19 cases and deaths in Canada are on the rise") and started quoting Obama priorities and talking about Republican policies, which have nothing to do with an article on Canadian politics.

On the Rosemary Barton's morning show yesterday, I heard a vicious argument from a Conservative commentator. In between his condescending remarks, which included, “now look, Rosie.”, the argument ran as follows:

The government will have to spend a lot of money to save our country. In contrast to this argument, though, we should spend our money wisely: on new fighters for the air force and the navy, rather than on new public services. Instead of supporting universal public health care, we should oppose it for this reason. However, large expenses like the purchase of new air force planes are a good idea because so little is left over

The next few months will likely reveal the results of the new political alliance that has formed between the Conservatives and the New Democrats. While the New Democrats are planning on passing key policies, the Conservatives are hoping their cooperation will result in passage of their priorities. The first test of the new alliance will take place this week, in the form of a budget.

After Covid-19, one of the main post-pandemic Liberal projects is to offer high-speed internet and/or mobile phone service for low-income seniors ($20/month) in the effort to get more seniors online and therefore help fight the Covid-19 virus. The Conservative’s response? Tax the banks! The response of the Liberal’s who have a negative view of big corporations? Bring online the small mom & pop businesses who are the backbone of our

To be poor in America today, with one exception, is to lead an almost impossible existence. From a political point of view, it is to have the worst of all worlds— it means always being in competition for scarce dollars, the right to live, with everyone else who also wants to live. While some of us suffer from the worst consequences of this competition, all of us bear the cost of the Conservative refusal to

Of course, that view is completely unreasonable. The poor don’t contribute very much to inflation. The push to higher prices, when it comes from the “demand side” of the economy, is by consumers with money. I mean, d’uh. Creating a more equitable society does not encourage inflation. On the contrary, the less equitable to society, the more vulnerable it is to

In the current health crisis, rising medical bills are affecting consumers. In general, inflation isn’t rising because people are spending more because of the pandemic. However, supply is the main cause of prices, too. Because of the pandemic and the war, Americans are facing shortages. One of the major reasons is the need for people with Covid-19, or the need for their loved ones and friends. The rising prices of goods and services are also the result of the war; the rising prices are mainly caused by a shortage of labour.

For it’s poor consumers, just as in the battle against inflation, who take the brunt of the cost of Covid. Higher prices for the essentials aren’t really felt by the wealthy. Instead they just move to lower-cost countries or borrow more money. The wealthy can also choose to spend less on overseas vacation.

For this is why the agreement between the Liberal Party and the New Democrats is so important. They recognize that the people at the top must first consider the interests of people who are not among them, and that means more and more daily. Therefore, they must find a compromise and find a way to work together to achieve more and more each day.

The number of COVID-19 cases and deaths in Canada are on the rise.

A politician is in a position to influence the economy. However, the public is in the best position to understand the effects of their choices on their own personal finances. If a politician is attempting to increase consumer spending by increasing the accessibility of health care, they should be opposed. However, if the government is investing in a new fighter jet, it will likely be the best thing for the economy.

An important part of the Obama Administration's plan to alleviate the financial burden on the public is to provide high speed internet to low income seniors. This is a good idea and I hope the conservatives will agree to it.

While Republicans argue that their focus on fiscal responsibility is a boon to the public, their policies have a negative impact on the poor. The less the government provides for low-income people, the more they die. That is the cost of the policies of the Republican Party.

In the battle against Covid-19, the poor are expected to take the worst of the disease. Higher prices don't really hurt the wealthy; they can just spend their way through it, and perhaps salt a little less in their overseas nest egg. Higher prices and lower wages don't really threaten the wealthy. In fact, they can just spend their money and make a little more. The people who are hardest hit by the disease are those who are already struggling. The poor are expected to work