How Does Learning Take Place 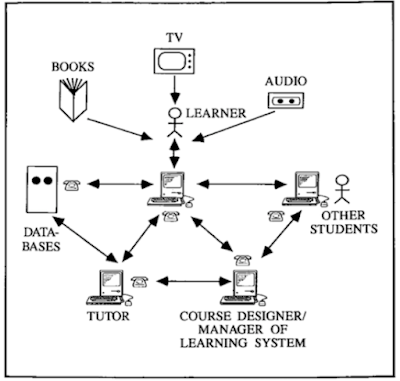 The second part of Tony Bates's criticism of my article on connectivism focuses on my discussion of other learning theories and on how learning takes place.

Readers should recall that I define learning as the growth and development of connections between entities in a network. So when asked how learning takes place, I respond by describing the mechanisms that create connections or adjust connection weights. Bates does not address this part of my paper at all in his commentary. This should be noted in the discussion below.

Bates is more concerned with my treatment of "most other existing theories of learning". To be clear: what I object to in these theories is that they are essentially 'black box' theories. My concern is that they do not describe how learning takes place. This, it may be recalled, was a major criticism of behaviourism in the 1960s and 70s.

This is the basis for my statement that "Other learning theories talk about the activities that are set up and organized by an instructor or a teacher rather than what learning is like from the perspective of the individual." This could have been expressed more clearly. I am asking here for a description of what happens inside an individual learner when they learn, not a subjective account describing the learner's perspective.

This is why a theory like Piaget's is unsatisfactory. It makes the claim that humans progress through several definable stages in cognitive development. Specifically, the visible development of child behaviour is associated with the emergence hypothesized cognitive capacities, such as 'object permanence' and 'decentering'. But Piaget's theory tells us nothing about what happens as children grow and develop. It's simply a naming system for a series of progressively more complex behavioural dispositions.

The many criticisms of Piaget over the years serve to underline this point. The postulation that behaviour is explained by various bits of conceptual knowledge opens the door to a multitude of mutually exclusive and unproveable alternative theories, each using the same mechanism of providing a taxonomy of observable behaviour and postulation of conceptual hypotheses that explain that behaviour. From my perspective, the mere fact that Piaget's theory could be produced as an example of a viable learning theory in 2022 is prima facie evidence that the method employed to produce such theories is flawed.

The fallacy evident in such approaches in clear in Bates's own words. Witness: "He showed clearly that children go through different stages of mental development. This is critical in understanding how we develop concepts and ideas and in particular that learning is dynamic and incremental." Here we have the concept being used to explain the concept. Children go through go through different stages of mental development because the development of concepts is dynamic and incremental.

One of the reasons why I like the phrase 'learning networks' so much is that it can have two meanings:

The first sense of the phrase is as old as the hills. From the moment people discovered networks - whether they be postal networks, telephone networks, or computer networks, people have thought of using them to support learning. It's probably the oldest trope in the academic literature of learning and development: someone invents 'X', someone publishes a paper titled 'Using X in education'.

So - yeah. As Bates says, "the concept of networked learning goes back more than 40 years. Hiltz and Turoff wrote a book about networked learning in 1978." Bates wrote a paper in 1986 containing a 'networked learning' image (I love the little telephones at each link). Linda Harasim's Learning Networks came out in 1995. My own introduction to using computer networks in learning was John Baker's Philosophy of Mind class in 1986, I wrote my Master's Thesis using a computer network (and a lot of books) in 1987, and was building my own (specifically, a BBS) by 1988.

What any of this material useful? Sure it was! There was a wealth of material produced in the late 1990s and early 2000s that described networked learning technology and gave advice on how to use it to support education. There was even a sense of how it could be used to do things we couldn't do in person, like hold a world-wide asynchronous discussion. The new tools required new skills and people were learning them and passing them on as fast as they could.

The upshot of all that work, to my mind, was that the community determined that, if you do the same sort of things online as you do offline, and do them in the right way, being aware of both the capacities and limitations of digital technology, then you will get more or less the same leaning outcomes. This lesson was realized in the concept of the No Significant Difference phenomenon.

The focus of connectivism is, to my mind, learning networks in the second sense, that is, networks that learn. And I think it's pretty clear that the discussion of networked learning described above did not have this in mind. You can read about it in Harasim's 2017 book Learning Theory and Online Technologies, though I will say you'll read more about the criticisms of connectivism than about the theory. In fairness, Harasim had to filter through a pile of disconnected notes, blog posts, conversations, half-baked ideas and disagreements. After all, it's not like connectivism arrived fully formed! My current article is an attempt to provide a single comprehensive account of connectivism, though even at 17,000 words it is probably still too short to accomplish that task.

And I want to be clear that I am sensitive to two fairly obvious facts: first, that there is still a great deal to learn about how computational neural networks learn (the rapid advances in things like deep learning are evidence of that), and second, that humans, although certainly material, are not computers, and that there may be (indeed, probably are) major differences between human learning and computational neural network learning. Nobody would be more delighted than I would to find that there is a whole dimension to human learning over and above mere connection! But what I can say, I think, is that there are significant similarities, and connectivism is about learning what we can from the similarities.

So with these caveats we can address Bates's criticism that "there are serious questions about his explanation of how networks learn." And more specifically:

He and Siemens talk about nodes in a network (which may or may not be humans) and that nodes send ‘signals’. I get that the whole may be greater than the sum of the parts, but what do the nodes actually contribute to the network other than sending signals? In concrete terms, if we look at a connectivist MOOC, individuals in the network contribute ideas, thoughts, knowledge to the network – where does this knowledge come from? It comes from what the individuals have learned prior to participating in a network. Much human learning clearly takes part from outside a network.

There's a lot to unpack here. I think it would help a lot to distinguish between some different types of network as clearly as possible:

Now this is just a rough-and-ready characterization of the various elements to the various types of networks. There are more things that could be described, and the descriptions could be more detailed. But it gives us a sense not only of how to answer the questions but also of why the questions miss the point in the first place.

For example, he asks "what do the nodes actually contribute to the network other than sending signals?" We could say 'nothing', but that wouldn't be quite right, because the sending of the signal depends on the input to the node, the sensitivity of the node to the signal, and the conditions under which a signal will be sent. All of this varies depending on what kind of node we are talking about, and the characteristics of the individual node.

He says, "Much human learning clearly takes part from outside a network." Yes. That is because it is the human neural network that is doing the learning in human learning. There is nothing in connectivism that says that a human has to be a part of a social network in order to learn, over and above the relatively obvious statement that if we want humans to learn from social phenomena (such as culture, science, language, etc) then the human will have to be exposed to these phenomena as input.

Bates asks, "how did my mother learn to read?"

There are two ways to answer that question. On the one hand, we can talk about what happens outside his mother's brain: the social conditions, activities, events, etc., that led her to learn how to read. On the other hand, we can talk about what happens inside his mother's brain: the way a human neural network developed and grew over time such that it was eventually described as 'being able to read'.

Educators are for the most part concerned about the first story, that is, about the social conditions, activities, events, etc., because they are in the position of wanting to create the best possible set of conditions to facilitate learning (and, typically, learning of a specific sort). But these are not learning theories. They don't explain why his mother learns to read, only (ideally) how best to produce that result. We will call these educational methods.

A learning theory explains why his mother learned to read, and the connectivist argument is that this explanation is found at the neural level, not the conceptual (or cognitive) level, for reasons I outlined in my previous post.

And specifically connectivism posits that 'learning to read' is a matter of pattern recognition, where a series of experiences and feedback develops (through the biological mechanism of neural plasticity) a neural structure such that when a specific pattern is presented to the human neural network, a series of neural activations follow (aka 'pattern recognition', which most humans experience as consciousness), causing in some cases a characteristic response.

When we say his mother is 'able to read' we are not describing a property of his mother per se over and above the description of the process of pattern recognition; the assertion that 'his mother is able to read' is based on social signals (ie., her production of words in response to visual stimuli, and other people's responses to those productions) and is a form of social network output (or, as shorthand, social knowledge).

I can imagine someone (Tony Bates, even) reading this and saying that there is nothing particularly new or interesting in what I've just said. That would suit me fine. It's the correctness of this account that matters, not the novelty.

Indeed, a lot of what I say here is consistent with much that has been said about educational methods over the years. There is much, for example, in constructivism and even direct instruction that I would recommend, especially if some very specific learning outcomes are desired. As I've said many times: propaganda works. Advertising works. That's why we have so much of it.

At the same time, though, I argue that learning theory and educational methods should be consistent. Educators, to my mind, should practice what they do with a clear understanding of how humans learn, not an understanding muddled with illogical and incoherent conceptual theories. Even if connectivism should prove to be false, this much should still be true.

Again - not new! But how many conceptual frameworks presented as 'learning theories' will we have to endure before we reconcile human learning with what humans actually are?