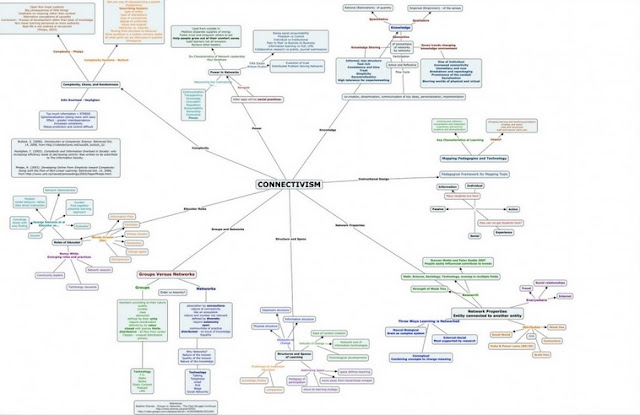 Tony Bates has offered a preliminary critique of my paper on connectivism. He suggests that, in the words of Ebbinghaus, "What is true is alas not new, the new not true" (1873, p. 67). To respond to Bates's criticism I offer words from the same author: "Wherever the structure is touched, it falls apart” (1873, p. 57).

Bates's response breaks down naturally into three major parts. In this post I will only consider the first. As Bates says, we need to begin by understanding what learning actually is. Bates also accepts that "learning itself is fundamentally a physical process" where "the brain takes input through various senses, and these form patterns or networks of neural connections."

So where's the criticism? It is this: "this does not help much in understanding what has been learned, or how it has been learned. It’s like saying a television drama is a dynamically changing set of pixels. But what about the plot, the characters, the setting?" I will say, it was worth the wait to be greeted with this lovely analogy.

Here is the structure of the criticism in more detail:

Learning is really about consciousness and thinking, rather than wondering what neurological reactions are happening, and how neurons or nodes in a network are connected. It is these psychological aspects of learning that educators and learners themselves are most concerned with.

any theory of learning needs to explain these psychological manifestations of physiological activity. You need to look at the action on the screen, not the patterns of 1s and 0s that create a computer program.

This concludes the first part of Bates's critique. There are other important points that he makes, first, regarding the description of how networks learn, and second, how this applies to pedagogy. I won't be addressing those here.

Bates is, in my opinion, offering a thesis that I have criticized at length over the years, the thesis we can call for brevity 'the cogitivist thesis'. The thesis amounts to essentially the following:

- our explanations of cognitive phenomena (such as knowledge, learning and consciousness) are most properly offered at this level of description.

- any theory of learning offered at any level of description must account for, or explain, cognitive phenomena at the cognitive level.

My response is, essentially: there isn't, they're not, and it doesn't.

I will say, though, that Bates is quite right when he says of my account that it's not new. We are here on well-trodden ground. A host of writers before me have rejected the cognitivist thesis, among them authors such as Stephen Stich, Paul and Patricia Churchland, and many others.

The Case Against Cognitivism

To borrow the first line of Ludwig Wittgenstein's On Certainty, "If you do know that here is one hand, we'll grant you all the rest."

But as I suggested at the top of this article, if we push at this structure, it falls apart. I'm going to argue, briefly, that the statement "I know that 'here is one hand'" is incoherent and cannot form a part of a learning theory. Here are the major arguments:

- there is in fact nothing that it is actually about. For it to be about something, the word 'hand' would have to be a sign (or perhaps he should say, a 'cognitive object') that represents or references something (a specific physical object, state, property or class), and this is either a physical object, or a physical brain state. But there is no way to determine what that object is (this would be Kripke's sceptical interpretation of Wittgenstein)

- neither the non-physical meaning of 'hand' nor and psychological statement (eg., 'I 'know' that 'here is a hand') have any causal force, that is, the fact that I said 'here is a hand' has no causal effect over and above the specifical physical properties of my utterance of 'here is a hand'.

Now, it is true that you can say "here is a hand" and I can say, as a result, "I believe that 'here is a hand'", but the cognitive level plays no part in the explanation of that sequence of events.

The explanation of teaching and learning in cognitivist terms in an example of what has come to be called 'folk psychology'.

Folk psychology can be useful because it gives us a handy shorthand for talking about complex concepts. It is an 'intentional stance' we can take, as Daniel Dennett says. The words we use describe what Wilfrid Sellars calls a 'manifest image', as contrasted with a carefully constructed 'scientific image' that is precise in its meaning and terminology.

We can see this by analogy with some other folk expressions we use all the time. We say, for example, that "the sun rose in the morning" and even "it got warmer out because the sun rose". But we know, of course, that the sun does not actually rise.

As time passes, these folk psychological explanations change and transform. Not so long ago it would have been common in academic circles to explain someone's behaviour by saying 'he has a kind soul'. Our more modern version of this might be to say 'she has a maternal instinct'. We can even construct a story about how these sentences might correspond with actual neural phenomena. But any effort to use them as an explanation will lead to confusion, because nobody actually knows what a 'soul' is or what it means to be 'maternal'.

This is why "neuroscientists are very careful not to make any direct links between specific neural network activity and observable cognitive behaviour, particularly in causal terms." The explanations offered at the cognitive level are different from those offered at the neural level, and more importantly, are wrong. So of course neuroscientists don't want to link the two.

The third condition of the cognitivist thesis asserts that the use of cognitivist terms, such as those found in folk psychology, requires explanation.

This may be true in a general sense, but not in order to provide a theory of learning. Learning can be completely explained in terms of the properties of neural networks. Asserting otherwise assumes that a cognitivist account of learning is a correct account, which is precisely what is at issue here.

But these is, if you will, an intuitive appeal to the requirement. As Bates says, we're quite dissatisfied with an explanation of television in terms of the state and arrangement of pixels. "What about the plot, the characters, the setting?" Surely we need to say something about them.

Sure we do. But let's begin with the obvious: a description of television in terms of the plot, the characters and the setting does not explain how the pixels got to be the way they are on the screen. There is no coherent explanation of how the physical level got to be the way it is based on statements from the cognitive level.

We still have Bates's question, though. Let's be careful how we state it:

- it could be stated as follows: "How do we come to believe that the images we see on a screen are about something (and specifically, about a story, some characters, and a place). But to state it this way is to assume that only a cognitivist explanation will be satisfactory.

- it could also be asked, "How does it come to be that we experience the TV show (and specifically, plot, characters and setting) in the way intended by the creators. That is to say, the creator didn't just randomly place pixels on a screen, but rather, there's some sort of story to be told about why these pixels are placed on the screen the way they are.

It's with this third question that we come to the crux of the matter. There is, in fact, no single unified story about how one TV show is produced the way it is, as opposed to another. Nor is there any single unified story that associates what the creators 'intended' with how the viewers experienced it. It would be great if there were; we'd never be left with gaps in our understanding of TV shows. But there are huge gaps, a fact often exploited by producers to allow stories to mean whatever the viewer wants them to mean.

I mean, think about it. You are watching a TV program, say, the movie The Untouchables. At the end of the movie, Ness kills Nitti by throwing him off the roof of a building. You want an explanation. Why did Ness kill Nitti? Was it because he wanted revenge? Any explanation based on Ness's cognitive state will be wrong. The actual explanation is that it was an artistic decision by the producers, drawing on a popular 'revenge flick' trope. In real life, meanwhile, Ness did not kill Nitti.

The Failure of Cognitivism

It is true, as Bates says, "It is these psychological aspects of learning that educators and learners themselves are most concerned with."Quite true. But they are mistaken to do so. My work in developing connectivism is rather less an attempt to create 'a theory for the digital age' than it is to respond to what I perceive as the overwhelming failure of cognitivism.

Cognitivism fails because it does not explain what it purports to explain. At its best it offers statistical generalizations of behavioural phenomena expressed in terms of hypothesized mental contents. But these mental contents themselves have no explanatory power; they are placeholders saying, in effect, 'we don't understand this bit yet'. They have no causal power; there is no mechanism for a hypothesized piece of mental content to have a physical effect.

We see this failure in the proliferation of theories based on cognitivist hypotheses, a proliferation so extensive that researchers select from one or another theory as a 'lens' in order to study some physical phenomena. To me, the thousand strands of constuctivism are prima facie evidence that constructivism is conceptually wrong. You don't see your doctor say "well I'm going to use a phenologist lens to understand your brain tumor" and you don't see an astrophysicist say "we will interpret the collision of black holes through an astrological lens." Yet such talk is the norm in educational theory and research.

Bates can say whatever he wants about the rest of connectivism as a positive theory about how learning works and how this relates to instruction. That's fine; connectivism, at least will be evaluated on scientific criteria, based on what actually exists and how these objects interact with each other. The positive thesis of connectivism is literally my best guess (or in academic-speak, my most plausible hypothesis) about how it all works, based on my own understanding of the phenomena. It will be corrected by those working at the scientific level.

Finally - Bates says "what is true is not new and what is new is not true." That's fine with me. I have never claimed novelty. It is not my objective to be new, to propose some thesis with my name attached to it. The ideas I offered in my Connectivism paper as well as in this post are taken from a lengthy and deep literature in which these subjects are discussed at length.

It is indeed to my mind a failure in educational research literature that everyone wants to create something new - a new taxonomy, a new model, a new framework - rather than simply focusing on what can be unambiguously known.