What's Wrong To Me

I have a political blog, Leftish, where you're get an idea of my sense of right and wrong on a range of political issues. But I want to take a few moments here to talk about what I feel is wrong at the most deep and fundamental level.

Anyhow, these are the things that are wrong.

I think life is the greatest gift in the world and death is its cruelest irony. To me, death is the end of everything. Any person's death, from the youngest infant to the oldest centenarian, is a tragedy. My feelings extend to animals, including insects, and even to plants. Any death is an irreplaceable loss; all death should be avoided.

And yet death is central to everything we do. As humans, we need to eat, and we can't eat rocks and dirt. We raise crops, we breed animals, we catch fish. We use plants and animals not just for food but for housing, clothing, and virtually everything else we do. A house lined with wood, as mine is, feels warm, familiar and comforting. All animal life lives on the death of plants and animals. There's no way around that.

And to be clear, I'm not vegan or even vegetarian. I embrace my humanity, flawed though it may be. Nor do I feel any requirement to meekly submit to be killed. If the gunships appear over the horizon, well, in the words of Bruce Cockburn, "If I had a rocket launcher...."

So I feel keenly the contradiction of this. Perhaps our need to kill in order to live is the Original Sin. To live ethically, though, we should seek to minimize this where possible and absolutely refrain from unnecessary and pointless death. This includes pretty much all human-caused human death. I oppose things like the death penalty, I take a strong pacifist stance in global affairs, and I think that policies that result in needless death are wrong. 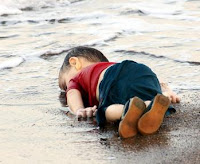 This - the death of Alan Kurdi - epitomizes pointless death. Everybody involved in this should hang their heads in shame. Any policy that results in this as a consequence is wrong.

I think we should be working to eliminate death. The ongoing study of mind and medicine, the development of alternative nutrition sources, peace and conflict resolution studies, education for personal development and flourishing - these are the highest ambitions. People who simply seek power and wealth operate in the service of death, not against it.

A short digression: for a long time I wondered: why do we die at all? The answer is apparent: so that others may live. So that we, as a species, can adapt and grow. Each person, albeit unwillingly, sacrifices their entire existence for the good of the species. But I don't view this as some higher purpose; it's just the way life is. There's nothing noble about it. Death is banal, pointless.

Everything I have said about death also applies to pain and suffering.

At the same time, pain is as necessary for the growth and development of an individual as death is for the species. Pain teaches us in a non-lethal way what things to avoid. It is a psychological response to things that damage the body.

That's why people think that pain is such an effective teacher and motivator. But people are easily able to see the difference between pain that is caused by naturally occurring illness and injury, and pain that is being deliberately caused as a matter of policy. We will at once do whatever it takes to get the pain to stop, and at the same time, refuse to yield to the politics and morality of whomever causes the pain.

I think most people were probably with me for the first two sections of this post, but this is probably where I part with most people's sense of morality. I believe wealth and power are wrong.

To be clear about what I mean: wealth is the accumulation of resources far beyond your personal need, and power is the application of those resources, typically by causing death and suffering, in order to gain personal or material advantage (usually for the end of amassing more wealth and power).

As I've often said: great wealth is prima facie evidence of criminality. It's not generally possible to honestly obtain great wealth and power. Yes, there are exceptions. You could be lucky and win the lottery. You could leverage an advantage given to you by your parents.

Again, we can see the contradiction here. We all need some wealth and some power in order to live comfortable lives free of stress and fear. But beyond that, if power and wealth continues to accrue, then there's something wrong. Often, this continued accumulation of wealth is at the expense of someone else. It is the result of a society that has been rigged to favour the wealthy, and therefore to cause needless pain and death in those who are not wealthy.

Since we're all pretty much agreed on the wrong of pain and death, I see this as the fundamental moral issue of our time. In the past the people we considered 'great' waged useless wars of conquest and owned slaves and serfs, and we rightly condemn their ethics. In the future we will look back with the same revulsion at the accumulation of power and wealth by the scions of today.

I'm not sure where exactly to put this in the list. Selfishness is often the cause of wealth and power, as the expression of the mantra "greed is good". As in the case of the accumulation of wealth and power, greed expresses itself at the expense of others. It legitimizes in the greedy other unethical behaviours.

Again, each of us need to look out for ourselves. We need to eat and stay healthy, to feel good about ourselves, to have and care for friends and family. As the airlines tell us, "Should an emergency situation occur, you need to put your own oxygen mask on first, before attempting to help those around you." 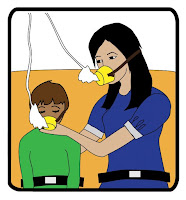 Selfishness is when, after putting on your own oxygen mask, you begin to collect other oxygen masks around you, so that other people can't use them. And that's what's wrong.

There's an old adage about virtue being the medium between excess and privation. As Aristotle writes "There are three kinds of disposition, then, two of them vices, involving excess and deficiency respectively, and one a virtue, viz. the mean." And there's wisdom in that. But it isn't the mean (in the sense of 'middle') that we're aiming for. It is the sense of enough.

Selfishness is not knowing when enough is enough.

That's why I've classified it separately from wealth and power. These are special cases, because their impact on others is so great. But there are many ways to be selfish, and mean and petty forms of selfishness are wrong as well.

Being 'honest' isn't the same as telling all and only the truth and I think people (mostly) understand this. Sometimes it's just a way of being mean (as Taylor Swift writes, "so casually cruel in the name of being honest"). Dishonesty similarly references a deliberate attempt to misinform through the provision of false or misleading information.

You can tell the truth, and still be dishonest. There are many ways to do this. What's key about dishonesty isn't the literal semantics of the information involved, but rather, the intent to sway a person's beliefs about the world to their disadvantage and/or to your advantage.

If you think about this way of putting it, it makes sense. A person telling us a story isn't telling us the truth, but they're not being dishonest, they're just telling a story. Meanwhile, a person saying something true while knowing it will be misinterpreted by the listener is being dishonest.

Dishonesty is the standard operating procedure in business, media and politics. Our economy is based on dishonesty. And it's wrong.

While I could write a book on dishonesty, I want to take one of the precious few paragraphs I have here to talk about advertising. As I have often said, advertising is the original fake news. While it is undeniably a good idea to advise people of goods and services you may have to sell, it is unquestionably a bad idea to mislead them about the nature or efficacy of those goods and services.

Advertising and propaganda are especially pernicious when they play the long game, creating (as it is said) a demand where none exists. There are many ways to do this - creating status symbols, for example, or creating conditions of managed scarcity. Advertising aimed at children is especially wrong, because children have no defenses, and advertisers can manipulate desires (for cigarettes, say) that last a lifetime.

I think this pretty much wraps up the big set of wrongs for me (if I think of more I'll add them). A lot of things that are wrong are wrong, at least to me, because they result in one or more of these. Slavery and colonialism, oppression, discrimination, etc. are on my reading applications of power and wealth in the name of selfishness and cause pain, suffering and death.

I think that I should be clear that there's an awful lot that can be covered under the heading of 'pain and suffering'. It's not some abstract idea that we can measure say say (for example) "you may think you were suffering but in fact you were not." That's not how pain and suffering work.

Human psychology and physiology are incredible complex. Each person is unique in a multitude of ways. As Tolstoy says, "Happy families are all alike; every unhappy family is unhappy in its own way." We can't presume that our own forms of pain and suffering are the same for others. The Golden Rule is wrong precisely because it presumes that if we don't feel pain and suffering, others don't either.

That's why it's so important that each person be able to determine for themselves as much as possible the terms and conditions of their own lives. It's one thing for a person to go on a fast for religious reasons, quite another to go on a hunger strike, and yet another to go hungry for lack of food. The physical condition may be the same, but the description of the pain and suffering in each case is very different.

For me, this sense of personal freedom is fundamental. I react strongly when people try to tell me what to do or what not to do. I sometimes say in jest that it's the Irish in me.  But I do know that these expressions of power are rarely for my own benefit. They are attempts to manipulate me or to force me to serve the often illegitimate interests of someone else. To respect their power. To fear their wealth.

Not everybody else is like this, and it probably reflects my upbringing, my acculturation, and my privilege. I get that. But I'm not going to stop feeling the way I feel, and wishing everybody who wants to could feel the same sense of freedom that I do.