Reading this month's First Monday, which was a special issue on the emoji, inspired me to a creative thought, which I document here.

The thought has two parts:

- first, there's the (probably unoriginal) thought that the existing and future set of emoji (or, related, emoticons, or icons (including, say, font-awesome) in general) can or will constitute a language. Such a language would have the advantage of being international, easy to learn, and reasonably expressive.

- second, the possibly original thought that we can (and should) make the language of emoji that much more expressive with a simple set of diacritical marks.

Let me explain. Here's a typical emoji, which we might call a chef or a cook or a baker:

With the addition of just a few marks we can create what is sometimes called a 'word family' - a set of linguistic moves around a single concept.

Add a 'hat' or 'roof' to specify that our icon refers to a thing (specifically, a person), who is a cook: 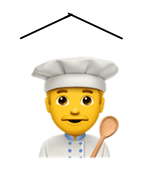 Add a line or a swoosh under the icon to signify that it's a verb. In this case, our very would mean something like 'cooking' or 'baking'. 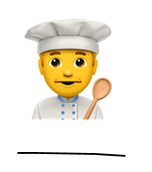 The idea of something being something else is a core linguistic function. These expressions can be literal, as in 'Socrates is a man', or they can be metaphorical, as in 'Lena is a table'. The cook emoji can similarly express 'being a cook'. We'll use a single mark to indicate being, as follows: 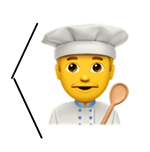 If we wish to assert that some specific thing is something, this mark allows us to use whatever signifier we want for that thing. For example, "Stephen is a Cook".

If we want to be even more specific, we can insert a QR code in place of the image icon, and the reader can go directly to the page representing that person or object.

Adjectives modify nouns, and adverbs modify verbs, so we can handle both concepts with a single mark. Also, both adjectives and adverbs can be stacked, that is, multiple adjectives or adverbs can modify a single noun or verb. So we'll use the same arrow-like mark pointing to the thing being modified, like this: 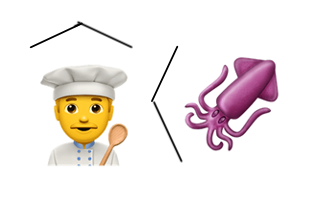 This is a squid cook (or, possibly, in a different context, a cook that resembles a squid - we can allow for some double meanings an puns; no good language is complete without them). 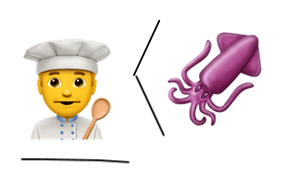 This is squid cooking. (Note that in a lot of cases, the diacritical marks can be omitted, if the conext collapses or is in some way obvious - here, for example, pretty much any interpretation will reduce to 'squid cooking' or 'squid cook' (which are themselves closely related) so the marks would probably be optional in day-to-day usage.)


Just a couple more and we're done: conjunctions (or, viewed from a different perspective, propositional operators): 'and', 'or', 'if-then', 'not'. The symbols are what you would expect:

These are placed in between emoji or groups of emoji and mean basically what we think they would mean. For example:

This means 'Cooking squid or sushi'. As an interesting sidenote, take the 'or' symbol away and replace it (optionally) with the modifier symbol and you have, and you have:

These are the basics, and I'll end the post here (rather than build the entire language). I think that things like prepositions and modalities can be created from the emoji themselves. Things like universality and specificity are implicit (and more specifically, a universal is any conditional that does not specifically reference being.

Maybe the new language of emoji will evolve this way, and maybe it won't. But I would be very surprised is some means for expressing these concepts were not incorporated, as they enable emoji to evolve from a simple system of reference to a fully expressive international language.