A Quick Definition of Neo-Liberalism

In response to Alex Usher (and in anticipation of future posts in his series):

This is an interesting start, though I would have hoped for a more tightly bound definition at least by the end of part one. Each of the four senses of neo-liberalism that you raise can be qualified in important ways.

- the role of markets - does not just mean the use of markets. In neo-liberalism, this means that markets are unregulated, or minimally, self-regulated. Socialist and mixed-market economies often employ regulated free markets.

the role of performance data - not sure exactly what you're up to here, but minimally, neo-liberalism endorses the idea of "you manage only what you can measure", which rules out such things as well-being, happiness and tranquility as measures.

the role of management - in neo-liberalism, management is focused on the bottom line, to the exclusion of all else. There is no sense of management for other outcomes, such as social good, environmental good, etc., unless some entity is willing to pay for these.

I think it is important, if you are going to talk about the neo-liberal university, not to soft-sell neo-liberalism. It has a hard edge, and to the extent that it doesn't, it's not neo-liberalism. 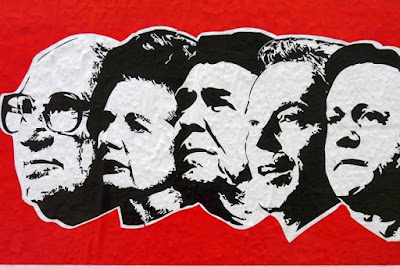