The Future of Learning Management Systems: Development, Innovation and Change

Summary notes from the presentation at from at the World Conference on Online Learning, Toronto.

We forget about the perspective of time. Let’s look at 2011-2017. Thrun was saying (2012) 50 years from now there will only be ten institutions delivering higher education. This was the perfect example of hype not helping the industry. A lot of the time there’s too much talk about ‘it’s been this way the last 20 years’ or ‘the future is going to change dramatically’.

There are lot of new technology developments in ed tech but a lot of business plans come straight out of South Park. Course completion rates are a problem, also student authentication. A lot of barriers had to be overcome for the commercial MOOCs to do what they were saying.

Meanwhile in the U.S. - existing schools and a lot of the more conservative partners really are making progress. 30 percent of student shave taken an online class. In Canada, similar, 12-16% of post-secondary students taking an online course for credit. The ‘department of academic technology’ used to me off playing in the corner. But now they’re loose in the house.

There has been this artificial dilemma: is online as good as face-to-face? But there isn’t a systemic way to evaluate what works. But there are studies: http://www.learninghouse.com/ocs2017 vast majority of students said online was better or just as good.

A lot of the focus on what’s needed is captured by quotes about async and individualized nature of online learning. Students can control pace and own learning styles. Software that provides instant feedback could be effective in improving course performance. These point to what LMSs are trying to address, and should address - things that could not be done the same way in face-to-face.

So to give a view of the direction where the industry should be going: an example about the habitable worlds course, http://e-literate.tv/s3-e31 - they created a course to illustrate the thought processes of science. The course was a problem-solving course - calculate the probability of life around different stars. It gets into various parts of science. They had tools for interaction, etc.

So, first: platforms matter. Everyone’s got an LMS but people aren’t proud of that (it’s like minivan ownership). When they first get an LMS there’s a reason for it. It’s solving a particular need. But over time the LMS companies began adding features, sometimes of questionable value. And the core design of the LMS is based on an old model. They used to be known as course management systems. That’s a more accurate description. Learners are just a list of entities that belong to a course.

But now we’re in a world where it’s much more important to focus on the learner, even to what they’re doing outside the course. But these are features that are ‘bolted on’. Feldstein’s law: over time any ed tech application adds features and looks like a poorly designed LMS.

Also, when LMSs were initially designed, they were the only app out there with any kind of scale. There weren’t that many that could be used in the classroom. Today, it’s completely different. There are tons of applications that could be used in the classroom. There’s a demand from faculty and designers to take advantage of these tools they use in their personal lives. And they create an expectation that ‘my system should be as easy to use’. There’s so much intense frustration with the LMS. They keep saying ‘why is this so hard to use?’ Not just usability - there’s also ‘why does it go down?’

Also, over time, if you look at the LMSs that can serve an entire institution, there have been a lot of attempts by other systems to enter that mainstream. First there was the open source movement (Moodle and Sakai). Now these are in the mainstream - Moodle is the most used LMS in the world. In the early 2010s we see entrants like Canvas, which is not the fastest growing LMS in North America and Europe. And there has been a number of others people thought would enter the mainstream but haven’t - LoudCloud, OpenClasss, etc. Most recently Schoology, from K-12 and trying to get into higher ed. This is a very static market. There is not a large number of new entrants that have staying power. Google classroom is a very recent engtrant.

If we look at the data: new implementations are increasingly externally hosted (ie., hosted in the cloud) - it’s a lot slower outside the US and Canada but it’s growing substantially. Some systems, like Canvas, that’s the only choice. But all systems are moving toward that model. A huge part of this is to deal with the frustration of systems going down during exam week or first week of classes. The solution is to get into cloud hosting where it can scale quickly.

Another trend - maybe not the way it should be, but it’s where the data point: open source peaked in 2013 at about 34% and since then it has begun to drop. It’s funny with all the talk about open education, the licensing model of the LMS is not going in that direction. And it’s not just North America - it peaked much higher outside North America, but even there we’re detecting a drop. (Discussion: people perceive Moodle and Sakai as not as professional-looking and easy to use. Also, the drivers aren’t there - when Blackboard was acquiring everything, schools said they wanted to control their own destiny).  But given all that, Moodle is very much the most popular system (except in North America, where it’s roughly equal to Blackboard).

But - in all the regions - the vast majority of LMS activity is coming down to just a few vendors. What does that mean, when they’re all looking at only the same handful of LMSs? 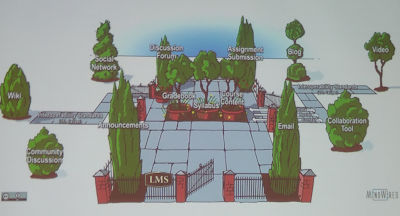 (Discussion - aren’t these purchasing decisions made by IT departments? Response - well, it should be driven by academics. But you need both. In a healthy decision there’s a balance there. But in reality, the majority have probably been driven by IT. Comment: some IT people focus on security and privacy. Response: it’s part of the reason Europe has been more reluctant to embrace cloud hosting (especially US-based cloud hosting. But these are being addressed - eg., AWS has hosting centres in Europe).

How do you resolve the issue where there’s more and more ed tech out there, yet at the same time universities and colleges view the LMS as the most important asset. A lot of people have argued that the LMS is going away. But the data doesn’t back that up.

That’s gets to the idea of the LMS as a walled garden. They were initially designed that way; nothing gets in or out. For a lot of online programs, this was a point of pride (eg., esp. eCollege). But over time you started getting external toold students and faculty wanted to use - esp. social networks and blogging. LMSs would create a really poor version of the tool inside the walled garden. But it wasn’t just those two - there’s video, collaboration tools, wikis- and these created feature bloat in the LMS: they had a lot of tools, but they were just poor imitations of what was available on the outside.

What we’re seeing now is more of a breakdown of the walled garden. The purpose of the LMS is to provide the basics, and make sure there’s a way to provide a pathway to the external systems (eg. LTI integration). A lot of this was enabled by learning Tools Interoperability (LTI). LTI isn’t perfect - too much focus on passing rosters and grades. It takes forever to get top the next generation. But schools are saying that the LMS is still central, but should enable the use of third party tools. So it’s the idea of LMS as a portal (without having to sign into five different systems). Beyond LTI there are other standards - xAPI, Caliper, etc.


These are done differently in different systems.

Where I don’t see this happening is in competency-based systems. They’re sticking pretty much to the walled garden model.

(Comment: has there been less feature bloat? Across the industry there has been improved usability and less feature bloat. But a bigger movement is the success of Canvas, which came out of the gate with a more minimal product. And also the competition is driven by D2L with their Daylight user experience.)

(Cisco has done the slickest job of integrating the tools within a single platfrom. I wish education ould follow the model There’s a big more by LMS vendors to work with Office365 and Drive from a file sharing perspective, but not nearly as much in collaboration.)

A big long-term trend to watch: initially there was a lot of emphasis on analytics, where they say ‘we will analyze the data’. Now it’s just ‘give us the data’ so whoever owns the students can do their own research. The big thing is data access; analytics is more secondary. The institution owns the data (should own the data)? The challenge is to get it out.
Email Post