It's the middle of winter, months away from spring training. Even the free-agent signings and trades have slowed to an icy crawl. For those of us who need our baseball fix, it's the darkest time of the year.

Let me recommend, then, a ray of sunshine, the Australian Baseball League. They're currently in the middle of their season, having just completed a nailbiter of an All Star game, and even better, many of their games are available on YouTube. 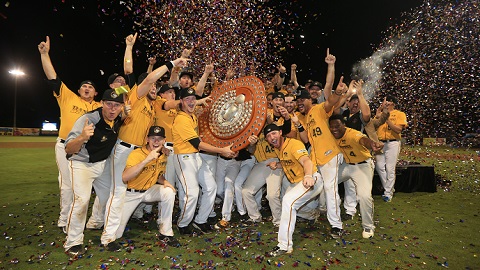 Of course, baseball is not a major sport in Australia. Aussies prefer their own brand of football, two types of rugby (League, and Union), soccer, and cricket. They also excel in Olympic sports, perennially among the top nations competing in the summer games.

So Astralian baseball is at best minor league baseball. But so what? It's baseball - the real thing! - being played in December and January, and we can follow the league and watch the games. What more could we want?

It's a development league of sorts, not only for the occasional major leaguer who finds his way down under, but also for native Australians who are honing their skills in a bid to make the roster of the Southern Thunder, Australia's national team.

The aforementioned ABL all star game pit the Southern Thunder against 'imports' playing in the ABL, designated the World All Stars. For the second year in row, the Aussies walked in off, the game played this past Thursday ending in a 2-1 score. Yes, you can watch it on YouTube. The Thunder have once again qualified for the World Baseball Classic, the 2017 edition to be played in San Diego this March.

The Australian Baseball League is a six-team circuit spanning Australia from coast to coast:

Adelaide Bite - the name might seem odd, but recall that Adelaide, South Australia's largest city, is located on the long shallow bay across much of the southern coast called the Great Australian Bight, and it begins to made sense. They're a .500 team with a 10-10 record. Starring for the Bite is 22-year old Texas Rangers draft pick Marcus Aurelius Greene, who leads the league in RBIs and is second in the dinger department. And sporting a giant red beard, starter Matthew Williams is one of the top hurler's in the league.

Brisbane Bandits - winners of the Claxton Shield (first contested in 1934) but currently fourth in the standings with a 9-11 record. The Australian Baseball League title is called the Premiership, in line Aussie football and rugby titles. Also like those sports, the schedule is divided in to "rounds", each round being a weekly series of three or four games against a single opponent. A bright sport for the Bandits is reliever Ryan Searle. In his seventh straight season with the Brisbaners, Searle leads the league in saves with six.

Canberra Cavalry - Australia's capital city hosts a second place team as the Cavs sit 4 games behind with an 11-9 record. Canberra faced the Sydney squad in the Wollongong Classic November 27 on the shores of the Tasman Sea - "if you lose sight of the escarpment, watch out" - and were winners in a 4-hour 21-11 slugfest, the most runs ever scored in an ABL game. With a homer and 5 RBIs, catcher Mike Reeves was player of the game, while fellow catcher Robbie Perkins leads the league in batting average.

Melbourne Aces - Leading the league with a 15-5 record, the Aces are home to the top two pitchers in the league, Keisuke Honda (ERA 1.21 ) and Mark Hamburger (ERA 1.91). A journeyman on the AAA circuit, Hamburger appeared in five games in the majors with Texas in 2011, pitching to a 4.50 ERA and one win. Honda, meanwhile, is trying to improve on a 7.71 ERA with the Saitama Seibu Lions of the Japan Pacific League. Melbourne also has the distinction of having the poorest audio quality of all the cities in the league. Melbourne is also home to Braves prospect Ronald Acuna.

Perth Heat - situated on the far west coast of Australia and on the Indian Ocean, Perth is known as the most isolated city in the world. It's nearest competitors, the Bite in Adelaide, are a three-hour plane ride away. Sponsored by a local drinking awareness program, the team refers to itself as the Alcohol. Think Again Perth Heat. Instead of selling season tickets, teams in the ABL sell club "memberships"- a single-person Heat membership tops out at a bargain $AUS 440. Second-baseman Luke Hughes is a long-time Heat star. At 6-14, the Heat are out of the running for this year.

Sydney Blue Sox - representing Australia's largest city, the Sox are struggling with a 9-11 record and lead only the Heat in the standings. 36-year old pitcher Craig Anderson has been with the team since 2011, pitching to a middling 4.44 ERA following a long AAA career. Thed Sox suffered this year from the loss of infielder Tyler Bortnik, who spent the 2016 season rising to AAA in the Tigers farm system.
The ABL regular season starts again with the next "Fixtures" on the 29th. Hefrfe in North America we'll be able to watch the Bandits at the Bit on Wednesday morning, the 28th (or catch the archive later). Playoffs begin at the end of January.

No, it's notMajor League Baseball, and nobody pretends it is. But it brings back thoughts of baseball from an earlier era, when the crowds were small (and passionate and noisy), the outfields looked out on a forest, a field or an escarpment, and the boys of summer played for the love of the game.
Email Post