We are now reading that the exodus of people from New Brunswick through the winter was the largest it has been since 1976. It's the 17th quarter in a row the province has lost people. And it shows no sign of slowing. 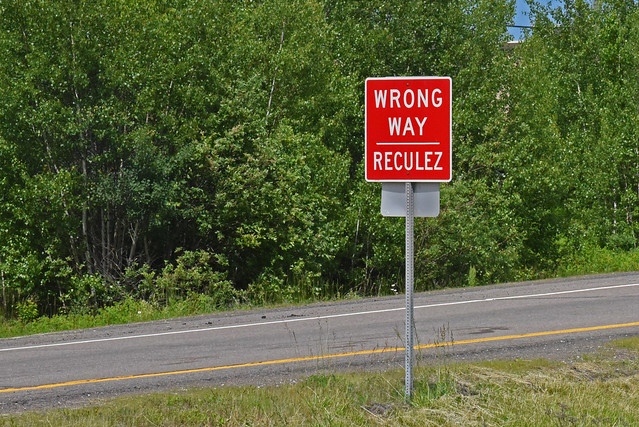 I live in Moncton, supposedly the most prosperous city in the province. I live in a small house in what was once called the 'golden triangle', an older well-treed area just north of downtown with close proximity to the hospitals and the university. But I discovered this week that the value of my home has dropped $40K in the last few years. I can't say I'm surprised.

This part of the city has been hollowed out; it is in decline, just as Moncton is in decline, and the causes are symptomatic of the malaise that has struck the province, a disease born of ineffective and weak-willed civil and provincial politicians.

Just a couple doors down, Castle Manor, a heritage building if there ever was one, sits rotting and boarded up, home to nobody but the vagrants. The city allowed the land and the building to be divided into two parcels, with separate owners, with neither having value to anybody. There was a pre-emptive attempt to turn the lawn into a parking lot, an effort stopped not by the city but by by local citizens once they began taking the chainsaw to the trees.

Right next to it, the CBC building sits empty, four or five storeys of office building right next to the Dumont hospital which should be brimming with opportunity. But the CBC, downsized to almost non-existence, has moved to the shell of an old Zellers store next to the Atlantic Superstore down by where Hall's creek enters the river. So many stories there.

The health care system is broken in New Brunswick. In so many ways. It is centrally run, it is the subject of political influence (often by politicians seeking to shut it down and privatize health care), and it is backward and inefficient.

The system was again the centre of controversy this week. The Moncton Cancer Centre announced abruptly that it would shut down its genetic sequencing program. This happened after the provincial government reversed a decision to block the purchase of genetic sequencing equipment in Saint John.

"I cannot accept to be a party to raping the taxpayers of New Brunswick," by duplicating services, ACRI president and scientific director Dr. Rodney Ouellette announced during an interview with CBC News. He seems to be about the only person in this province who can't.

Certainly the people who operate NB Power have no objection. One of their plants, which burn Irving oil (naturally), produces gypsum as a byproduct. This would normally be waste but they have agreed to sell the gypsum back to Irving. Anywhere else this would make money for NB Power, but in New Brunswick the contract is worded in such a way as to see NB Power pay the Irvings.

Meanwhile, next to the CBC Building and Castle Manor sits the Saint Patrick Centre. This building is still open and operated as a community fitness centre. It struggles on ancient equipment, chronic underfunding, and roof leaks that will eventually destroy the integrity of the facility.

This is what happened to Moncton High School, once the only high school near the centre of the city. The roof was left unrepaired for decaded, the metal girders rusted out, and the old stone heritage building was deemed unfit. The new school has now been relocated ten kilometers to the north, at the edge of city limits, in what literally was wilderness.

There's a lot of mystery surrounding the move, which was ordered by the provincial government, and greatly benefited the owners of local subdivisions. Across the road from the new school a new subdivision has suddenly emerged, called 'Baron Heights', named after the putative owner of the property, Baron von Munchausen (I kid you not).

The agreement with a company to 'develop' the old school fell through and now it sits, an abandoned hulk, about five blocks from where I live. The only saving grace is that the strip clubn, which for decades operated across the street from the high school, was torn down. But not until after all the students had left. In a city struggling to achieve more population density, this newest development boasts large "country lots".

Moncton High School is also the place where, in a controversy straight out of the 1950s, a girl was punished for wearing a dress that revealed her shoulders.

A lot of Moncton has been torn down. The local mall, Highfield Square, was torn down to make way for the new events centre (should it ever be built). Somehow, the price to acquire it jumped from $6 million to $12 million at the last minute.

Moncton can't manage large building projects. There's plenty of evidence for this, including the $3.8 million overrun on the stadium, due to "poor management". The feasibility study for the events centre ran well over budget. We recently hosted the World Cup there. Apparently the city was caught by surprise by the demand for bus transportation to the 13,000 seat stadium. They also designed the stadium with exactly three entrances, none of which face the road.

Just down the road from the former Moncton High School the local museum was 'upgraded'. Andrea and I tried to oppose the project before it got started, because it wiped out the last of the green lawn in the area and presented a three-storey wall as a facade on Mountain Road. It seems to have been secretly approved long before the public was told. Not surprisingly, it also ran into overruns costing millions of dollars.

Like I said, we live just a few blocks from the downtown core. Recently, the bar patrons there have taken to street-fighting; the videos have been splashed all over the world. So where are the police? They are armed like paramilitaries lined up en masse to stand down a handful of people opposed to shale gas fracking on Indian land just up the road in Rexton.

Or they're being shot at by a local thug who received his political education from a survivalist outlet across the river in Riverview. It turns out that the police we have are outgunned but a lone individual purchasing his weapons across the counter. The RCMP actually faces labour code charges in relation to the shootings.

But back to resources, one of the problems with resources in the province is that we can't exploit them without losing money. Take the forests, which should be a prime revenue driver. It actually costs the government money to have a forestry industry in the province.

Finally, we have the media in this city, which is owned by the local Oil and forestry company, and therefore not a reliable source of news. More, two editors were fired for cavorting with provincial government officials on the taxpayer's dime at a resort used by politicians, media and business to trade old boy stories and make deals, Larry's Gulch. Yes, Larry's Gulch. There really is such a thing. The newspaper's contribution to the economy was to fire all its photographers. There's some vision for you.

I could go on... and on, and on, and on. I haven't even mentioned offshore tax shelters, the impact of the federal government, the mysteries of fishing licenses, the problems with roads and bike lanes and the joke we call our 'active transportation' policy. The bus system designed by amateurs. The downtown that is now mostly parking lost. The mysterious payments made to attract concerts. The push to privatize our water supply. It never ends. I could spend a week tallying this up. I'm fed up.

The visible signs of decay in my own neighbourhood are not the result of external factors. They are not the global winds of change blowing hard across New Brunswick. They are self-made, self-inflicted, brought to us by government officials and the civic and provincial level who have been incompetent and sometimes unethical.

Too much money simply 'disappears'. Too often decisions are made to benefit shady associates and business connections. Too much of the government's money flows from the people and to the businesses and industries who should be financing it.

And the saddest thing is that there's nobody willing to stand up for the alternative. Even the NDP leader gets drawn into the trivia and minutiae fostered by the local paper instead of standing up to its owners and demanding accountability. Our provincial Liberal and Conservative premiers are active participants in this mess. Once they're done, they leave the province and are rewarded with high-paying consulting jobs, or some such thing.

My goodness, people. Have some damn courage. Stand up for something!

It costs a lot of money and takes a lot of courage to pick up stakes and leave. I know; I've done it before. In 1980 I left an economically moribund city of Ottawa suffering similar malaise and headed for the green fields of Alberta. It cost me every cent I had and I arrived in the city without a job and without prospects. And yet I still thought it was a better deal than living in a city where only the rich got richer and where the poor were an underclass.

It's not just 3416 people leaving the province. It's 3416 people making the hardest decision they've ever made, 3416 people giving up on the prospect of having a good, safe and secure life here in New Brunswick, 3416 people voting in the only way they can against a system that has become inept, incompetent and corrupt.