OLDaily Over the Years

Still messing around with statistics. Here's the graph of the production of posts on OLDaily over the years since the first posts in 1995:

Until 1999 the only posts produced are my articles. Subsequently, as I began the newsletter, the posts include the now-familiar links to resources in OLDaily. The red line represents the total, the blue line represents the daily tally. Notice the flat line where I took a hiatus in 2006. You can also see a bump in 2001. This was from a short period where I experimented with post-creation using the harvester.

Here's the same blue line with a somewhat larger y-axis:

Here again you can see my harvester experiments in 2001 (reaching a peak of 162 posts created on September 22, 2001). But even then, most of my posts were created manually, and sometimes I created a large number of them. I actually remember the very full days back in 2001, and in particular one huge newsletter I created from a cybercafé in Cronulla, Australia. Most of the links from that newsletter no longer exist.

Here's the graph of the persons who have signed up on OLDaily over the years. As you can see, my email subscriptions started in 2001 (that's why when I'm asked when I started, I give one of two dates, either 1995, or 2001). 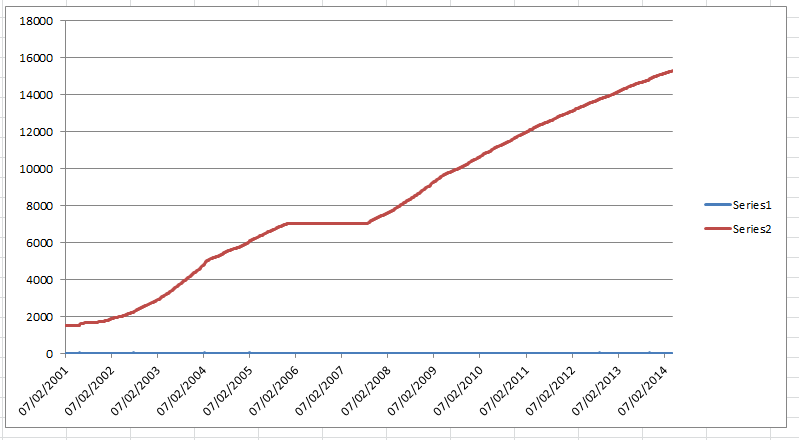 This chart needs a little explanation. There are 1480 people without a start date. This reflects a period between 2006 and 2008 when the person-record creation date was not being logged. That's why you have the flat line during that period. So the chart should start in the lower left at '0', and should reflect a gain of 1480 new subscriptions during that flat period.

It's interesting to note that while the growth in sign-ups has never been exponential, it has never really slowed down, either.

Subscriptions are a different story. People come, people go, and a lot of people cancel their subscription and move to RSS. Here's what my subscriptions look like over the years:

This one's a bit harder to figure out. There's no good reason for the jump in subscriptions in 2007 (except that maybe I came back from my hiatus in 2006 writing slightly longer and opinionated posts - though the same data suggest that people soon tired of the new format).

Meanwhile, in case you're curious, the states for this blog, Half an Hour, as volunteered by Google are as follows:

I'm not sure whether we learn anything from these results, other than that persistence pays, but it's interesting to observe them just the same.