So today is the day Google Reader is vanishing from the web. What next? Well, I've done my duty and saved my Google RSS data, and now I'm looking for a new reader. 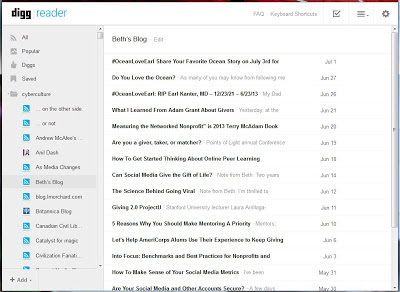 This is I think the one with the most promise on Day One. Clean and fast, and loading content without obvious difficulties (though it's reporting 'no content found' on a number of feeds, reflecting the fact that it is still loading data from the world).

The big problem on post-Reader Day One is that there is no means of identifying which posts you've read and which ones you haven't. This sort of works and sort of doesn't. Also, it displays every feed, whether or not there are any new items. Digg promises this is something that will be fixed shortly, but missing the biggest deadline in your business isn't really a good start.

I really liked the one-click migration from Google Reader (you can see it here) which worked to perfection. I was reading feeds (old and new) in the Digg Reader in just a few seconds. Slick.

But the sign-in system is a non-starter for me. If you want to sign on to Digg, you have to use a Twitter, Facebook or Google account. This isn't something you'll notice when you import your feeds (because the sign-in is just merged with the import). If there were an open (or even an OpenID) alternative, I'd be OK with it. But there isn't.

Digg is also pretty weak on the suggested links section. Basically, it's a category listing you can browse, with all the usual (and U.S.-centric) suspects - the Times, Wired, etc. Tired. RSS is great for personalized links, not content factories, but Digg doesn't even attempt recommendations. Neither si there a search of feeds or posts; I'm really going to miss that. 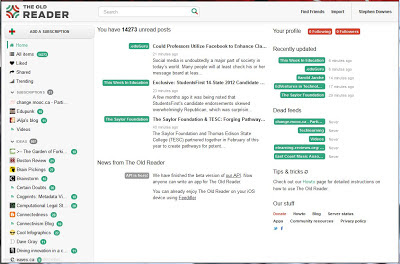 One of the first replacement RSS readers off the mark. The Old Reader uses OPML for data import - here - and that will slow adoption a bit (mostly because Google doesn't export OPML very well; it buries it in a package containing a whole pile of stuff you don't need).


That said, the Old Reader performs like an establish application. It has everything harvested so there aren't gaps in the coverage. It's able to tell you whether you've read something or not. It hides the feeds with nothing new added. It even identifies recently updated and 'dead' feeds.

But... but... but: it may just be me, but I really dislike the visual impact. For some reason the designer has opted to highlight unread counts and blog titles with an ugly green circle or box with white text. Aesthetically, it's awful, and when you look at the screen, you can't see anything other than those ugly green blobs.

So far as I can tell, there's no recommendation feature, and you need to log into Google or Facebook to 'find' friends. No search. Ugh. 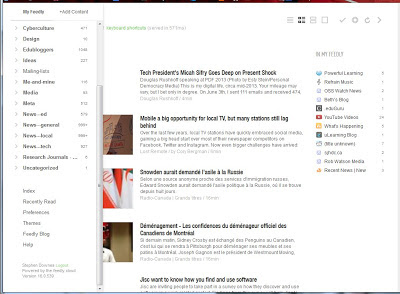 A lot of people like Feedly but my initial experience was confusing and disorienting. Like Digg, Feedly has a one-click import from Google Reader. It seemed to work OK (though it just sat there not really doing anything and I ended up trying it several times).

I wasn't sure how to actually view my feeds; all I got was a blank page. When I came back to it 15 minutes later I saw some content; obviously it had taken some time to populate. I don't like the menu on the left-hand side; you have to hover your mouse over it to see it, and when the content hasn't loaded yet from Google Reader you see nothing but an awful 'add content' button, which just takes you to category listings.

Feedly supports four views (others just support a 'list' and 'full content' view), including a 'card' view (which I don't like - I don't see the attraction of that format) and a 'magazine view' (which I do like). Two of the views have an 'In My Feedly' pane to the right, which wastes space and wouldn't be necessary if the left pane were always visible.

Feedly has historically been about the mobile and desktop applications, rather than the web-based 'cloud' version, and it shows. Yet ironically, I can't see from my web version of Feedly how to access the apps (but here's a list: iOS, Android, Kindle, Chrome, Firefox, and Safari).

That said, Feedly is a mature product, and you can see when you scan the preferences (bottom of that hidden left pane). "Feedly can curate and feature articles based on how popular they are on Google+ and Facebook." Also, you can share from Feedly to Twitter and Pinterest. Finally, you can "display a contextual menu when you select some text while reading an article" and look at a list of recommended feeds in magazine view. None of the views is particularly fast; they all appear to use an Ajax load, and there's no preloading, so there's always a delay.

I really had difficulty reading the articles. The 'Jump to Next' arrow would jump to the next category, not the next post or feed, even in full text view. So the only way to read is to scroll. Ugly. Also, there's no search (though from the blog it appears to be a priority).

People were complaining also that Feedly has no OPML export, but this has been quickly addressed. But as Dave Winer notes, it's not exactly by the book.

I signed up and got the message: "There are 5,317 people in front of you, all patiently waiting
on their free accounts on NewsBlur. By going premium you can get full and immediate access to NewsBlur."

This is a downloadable app, but it's for Apple only, and you have to pay money (which is the norm in the Apple environment). I've stopped using Apple products, so this one is a non-starter. 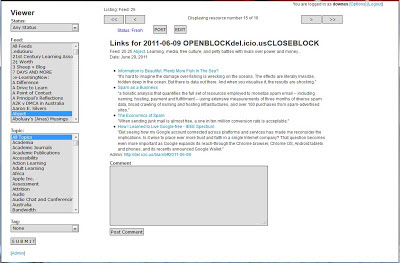 This is not going to help very many people, but it's an  option for me. A while ago I built a reader into gRSShopper to make content filtering a bit easier. It's not the greatest reader in the world (Google Reader was that) but it has some nice features, including deep integration with the main gRSShopper content management system.

gRSShopper displays a single post at a time, so breezing through them is a bit slower than the other readers. But you can sort posts by feed or topic, search, and of course edit and post directly to the newsletter from the interface. It doesn't try to remember what you've read or not (I've had versions that had that; currently I don't) but it organizes everything into a chronological 'river of news'.

gRSShopper supports multiple accounts with a single harvester (indeed, multiple sites with a single harvester) so like the commercial RSS readers it downloads feeds efficiently.I'd like to add a PubSubHubbub functionality to it to do away with polling altogether. Though that said, Google will probably stop supporting this project as well, so its future is uncertain.

I'm very likely to settle on gRSShopper rather than make one of the other readers work for me, if only because if I want the interface improved, I can do it myself.

The nice thing about gRSShopper for other people is that if you can get gRSShopper installed and running on your own website, you'll never need to worry about your RSS feed reading service disappearing again. Though of course the ongoing attack against RSS by Google, Twitter and Facebook continues apace.
Email Post