Who Are Our Students? Bridging Local and Global Learning Communities

Summary of a presentation by Derek Bruff, Vanderbilt University, @derekbruff

We have had 173,810 students enrolled in VU’s five courses as of March 27, 2013. It doesn’t mean everybody is finishing these MOOCs, but it does mean there these huge global learning communities forming, and I want to look at how these global communities are interacting with the local communities.

‘Wrapping a MOOC’ – an experiment by Doug Fisher, where he flipped his classroom using someone else’s MOOC. It was a 14-week semester, a graduate level course in machine learning. The first 10 weeks overlapped with Ng’s course. 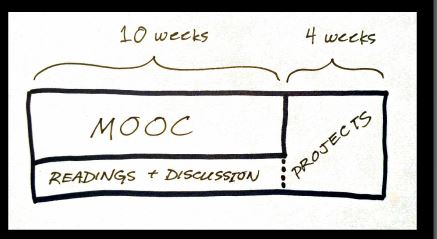 After some focus groups and research with his students, some themes emerged. First, students liked the online learning components (eg. Watching videos at 2x speed). But the 24 local students didn’t really interact with the global community – if they had questions, they went to the discussion forums, and found that someone else may have already answered it.

It also presented a design challenge – being able to align the MOOC content with other content he was trying to teach (he authored an article on this). His role shifted in the course – he was not the deliverer, he became the person who answered questions. There were challenges flipping the classroom with someone else’s MOOC – it was different from just assigning a textbook to be read outside class.

Some other experimentation: we’ve been trying to combine the global and local learning communities. We’ve already seen some courses with meetups (SD – we had them in CCK08). We tried to have some meetups on campus, getting people from the community to join in online in with the people in the course. But we wanted to be careful not to privilege the people who were on campus. And this created some interaction. But if you’re going to broadcast a local meetup, it limits what you can do at the meetup – eg., networking, small groups, projects, etc. would be a lot harder to broadcast.

Some examples of opportunities for students: graduate student Kathryn McEwan (now Dr.) worked all year with me on the MOOCs had worked on wikis on the past, led the meetups, and also enrolled in every Coursera course she could (she didn’t complete all of them). We’re not in a position to recommend best practices, because we don’t k now what they are, but we can look at common practices. We put together a resource guide which was a huge help.

Another example: Blaine Smith, doing doctoral work on education. Volunteered with Doug’s course (and wrote a paper based on it).

Curtis Northcutt, math CS student, undergrad, doing independent study. The opportunity for data-mining is just off the charts. He has been working with me learning how to do that. Also, Guy Kopsombut, who is a good illustrator, helped out. Especially for the grad students, who are planning faculty careers, they need to get their minds wrapped around this.

173,810 students. That’s more students than have enrolled in Vanderbilt’s history. 170K new members of the Vanderbilt community. They’re not paying tuition. But their presence counts. Think about the other things Vanderbilt does to offer free learning to the community. We do a lot of this sort of thing anyways. We’re used to thinking of our mission as enrolling students and granting credit. But we want to expand our role beyond that.

Question: has there been pushback from online students paying for a class that’s available free online.

Response: we did focus groups, we did a survey – I didn’t see any pushback. I think they probably viewed the MOOC as more of a super-textbook than as a course. It was easy to see the value-added that Doug brought to it.

Question: can you speak of student success in the course you studied?

Response: we were looking more at student experience and not at student success. It seemed similar, but I can’t say for sure.
Question: what were the challenges of using the flipped method, and of assessment?

Response: the DJ vs diva analogy – when I use a stats textbook, I can pick and choose fairly easily what we’re going to use. With the MOOC it was harder to do that picking and choosing – there was only one MOOC happening at that time on that topic. And he wanted his graduate students to go beyond the undergraduate MOOC. It was hard for students to navigate the easier MOOC with the harder grad-level content.

Question: about the engagement with the global community: thoughts?

Response: much of the foreign interaction is Q&A on how to do the work, and students didn’t have to participate in hat. In humanities it would be different. It had to do with the nature of the course. Also, Doug wasn’t giving assignments based on interaction.