Everything You Thought You Knew About MOOCs Could Be Wrong

Summary of a presentation by Phil Hill and Michael Feldstein.

View of the history of MOOCs: 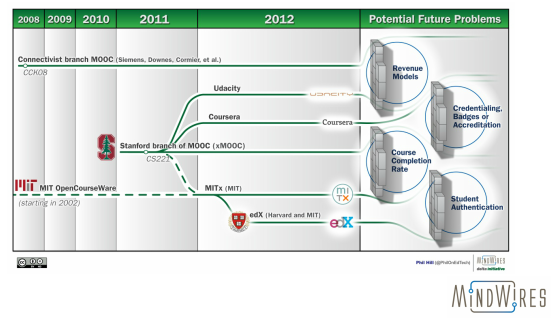 Most discussion is based around the Stanford branch of MOOCs, which started in 2011. They are a content distribution from a central perspective.

All of the MOOCs had the following problems:
-          Revenue models, or becoming self-sustaining
-          How students will get credentials from MOOCs

Michael – the main contribution MOOCs have made thus far is to reawaken our imagination about what’s possible in online learning. While students have become very interested in MOOCs, we need to think about what institutional problem we are solving with MOOCs.

We think of MOOCs as massive, open, online and courses. But what if they’re not?

Non-massive MOOCs: the number of students could be limited, for example for reasons of pedagogical quality. In some cases, some part of a MOOC may be massive while other parts are not. There is (says a commenter) Stanford’s SPOC (small private online course).

Non-open MOOC: most xMOOCs are not open in the sense that their content is not provided under Creative Commons. Mostly, ‘open’ means ‘open access’, meaning anyone can sign up. But that’s not the same as ‘free’.

Non-online MOOCs – the blended model. This is also related to the concept of ‘classroom flipping’. But there is nothing about MOOCs that demands that they be offered online.

We like to think of them as a continuum, between the little bits of material an instructor might hand out, all the way up to how much of a course you can put up online, a range from minimal materials, to courseware, to full courseware, to a full course. 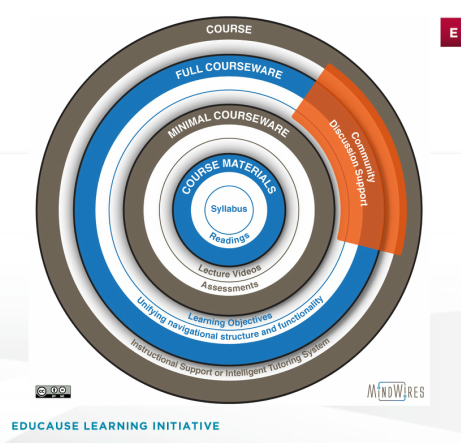 We think that MOOCs are beginning to span these two categories, and that the interesting future for MOOCs may be in the ‘courseware’ category. If so viewed, MOOCs as courseware begin to compete more directly with traditional publisher offerings.

Phil (responding to chat room): where do instructors come in? Are they interchangeable?
Michael: the answer is yet to be writer; there’s a good chance it’s a move in the opposite direction. The MOOC is self-sufficient; ‘MOOCs as courseware’ suggests there’s a definite role for local facilitators. (SD – aka the Triad model).

Whatever the future of MOOCs, it should be adapted to meet the needs of the students you’re serving, rather than copying from somewhere else. We ought not take a factory approach and suggest that we think we know what they ought to look like.

Phil: MOOCs are reflecting a trend toward a much more team-based approach to design, and teachers can get involved in that.

Next slide: if we look at where MOOCs are most influential, their major influence is not from MOOCs in and of themselves. There’s the suggestion that MOOCs as they are in 2012 is what will replace learning. But this model is still evolving. There’s a difference between the foreign element – the MOOC – and the transforming idea, which is what actually creates change. 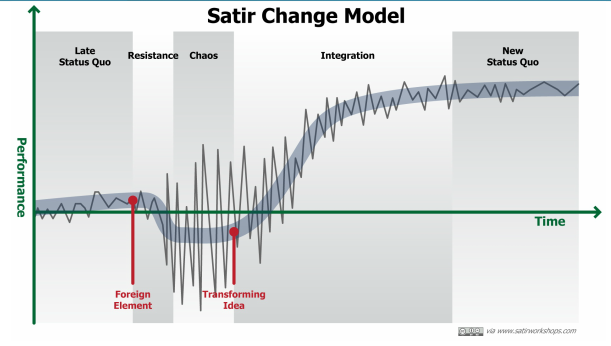 The xMOOCs in particular are the foreign element that dismantles the status quos, and what creates a lot of the push-back to the idea. And we see a lot of resistance to MOOCs in higher ed these days. There’s a lot of arguing, and a lot of chaos, but change hasn’t started to happen. Our performance during this period could even be worse than what was traditional.

The transforming idea is when groups begin saying ‘aha’ – if I apply it this way I will get performance benefits. And then we progress to a new status quo.

So when we look at how MOOCs are adapting, in a perfect storm with budgets coming together, people are no longer arguing that online education cannot work. So the status quo has been disrupted.
But now people are trying to work them out. But we shouldn’t assume that MOOCs as they are now are the final model, nor that by applying MOOCs of 2012 we can make everything better.

What we eventually adopt might not be the original idea that triggered everything else.
Question: is the MOOC, then, a good vehicle for learning?

Phil: I think it opens up a whole new potential for new types of learning, eg. Student-to-student learning. But the current design of MOOCs aren’t necessarily very good for learning.

Michael: it’s a bit like asking whether a poem is a good vehicle for communication. The answer is: sometimes. The xMOOCs are sonnets, and the cMOOCs are haiku, and they have very different characteristics.

The CMOOCs have done interesting work in self-organization and community for learning. The xMOOCs have scaled the lecture hall. Those are very different approaches. The value that you see in them depends on the value you see in those goals.

Phil: xMOOCs have really opened up a campus dialogue. I do think that’s been a big change.