Interesting discussion overall, and it would have been nice to see the actual data presented in the paper linked by the Washington Post article (instead of 'data table goes here' notices). It would be interesting to examine whether U.S. tax rates really are more progressive (and whether tax rates are really relevant at all to people without an income) but that would be t miss the main point.

Which is this: while granting that government really should be bigger, Fox argues, "as his research also shows, it really can't be done just by raising income tax rates on the wealthy. The U.S. already has about the most progressive income tax system around. European social democracies tend to have flatter income taxes, plus value-added taxes that hit all consumers. They tax capital gains and dividends at lower rates than regular income, just as the U.S. does, but they also all have lower corporate tax rates than the U.S."

But this doesn't follow. The proposition that the U.S. has a more progressive system than Europe does not entail that the U.S. system cannot be made even *more* progressive. Nor does it follow (from this assertion, at least) that making it more progressive would be a bad thing. Indeed, the difficulty with which tghe 'less progressive' tax regimes in Europe have had coping with the economic crisis suggests that having the means to tax windfall profits makes it easier for nations to cope with economic turmoil.

This argument is pernicious because it infers that progressive taxation hurts growth - drawing from Peter Lindert the Washington Post article argues "European countries needed tax systems that could raise a lot of money without hurting growth, and only regressive consumption taxes fit the bill."

The primary argument against progressive taxation, iterated in the Prasad and Deng paper (p. 27) is that income taxes penalize work effort in a way that regressive consumption taxes do not. Fox restates this point: "The economic logic behind all this is that progressive tax systems and means-tested social programs can carry with them big disincentives to work." An additional argument is that income taxes make the cost of government programs more apparent, prompting taxpayer backlashes. But none of this follows from the study either; it is speculation, at best advanced as putative explanation for the data, but not inherent in the data.

More to the point, even if we accept the proposition that the U.S. has a more progressive system (and again, this is far from beyond dispute) nothing in the data supports any of the conclusions advanced in this article. For example, we find Switzerland, Canada and Australia all around the 28 percent income redistribution range, yet at opposite ends of the 'progressiveness' scale, with Switzerland not very progressive and Australia near the 'progressive' status of the U.S. On the other axis, we find Canada, Germany and Belgium all around 0.1 in the 'progressiveness' scale, but varying from 28 to almost 50 on redistribution, the opposite ends of the scale. So it seems very difficult to assert a correlation between progressiveness and redistribution without introducing a large number of caveats and qualifications. 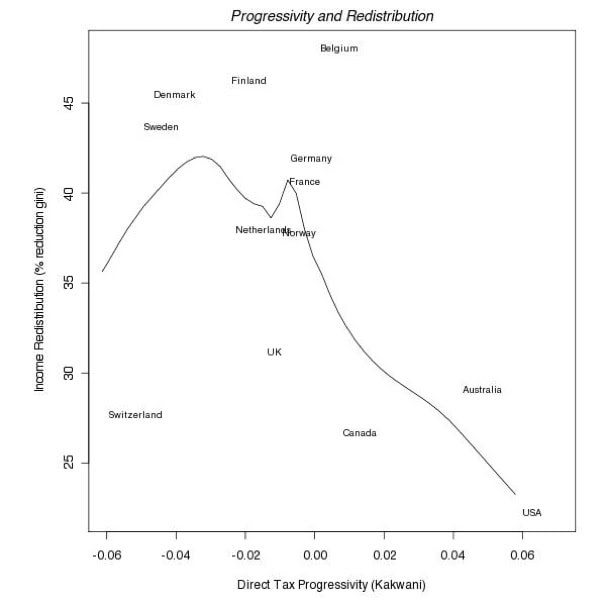 In fact, it is regressive taxation that is most obvious to the mass of people and which is most likely to create a voter backlash. Canada's Conservative government of the 1990s, after it introduced the Goods and Services Tax (GST), was reduced from a strong majority government to a 2-member rump. In Britain the Value Added Tax (VAT), introduced by the Conservatives in 1973, was followed by a Labour victory in 1974 and an even more extreme anti-tax government under Margaret Thatcher starting in 1979.

The basis for economic success following the introduction of consumption tax is therefore not related to voter satisfaction with taxation levels. Rather, consumption taxes conferred on Europe, and later on Canada, an export advantage. These taxes replaced existing sales, corporate and manufacturing taxes. They were levied at the point of final consumption only; business-to-business transactions were exempt from the taxes. They thus represented a considerable state subsidy for export industry, financed by consumers, that created prosperity in increasingly competitive international markets, and especially against the United States.

Europeans (and Canadians) have used this prosperity to support a range of social programs; these programs have in turn insulated the population from the worst effects of the economic downturn in those nations that could afford them. Would a GST or VAT help the United States? It may raise more revenue, but with corporate taxes already at historic lows, it will not generate an export advantage, and will not stimulate growth; indeed, the drop in consumption would create a recession, as it did in Britain in the 1970s and Canada in the 1990s, but on which, with no export upside, would be longer-lasting and more severe.

In the face of recession, particularly a recession in which incomes have been hit hard and consumer spending is quite low, the best mechanism for recovery is to put more money into the hands of those most likely to spend it, which is as always the poor. This is what Stephen Harper did in Canada, reducing the GST by two percent. Because economic growth is hampered not by the disincentive to earn, but rather by the inability to spend. Indeed, the suggestion that higher taxation makes rich people work less hard is spurious and inaccurate; the wealth the rich earn year after year has little to do with their effort, and far more to do with the advantage derived from their existing wealth.

To tell us, as this post does, that there is no point to taxing the rich is to build a fallacy onto a fabrication, to perpetuate the foolish presumption that it is the rich who generate wealth in an economy, and therefore only the poor who should pay for social programs. It is, frankly, an outrageous lie. Society requires not just the labour of its people to generate wealth, but also their active participation in the marketplace. When money flows disproportionately to the wealthy, they hoard it, or spend it frivolously.
Email Post