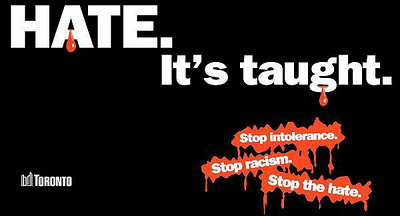 Michael Ruse addresses the American First Amendment with a deft argument but with a base of knowledge that does not extend to actually dealing with the hateful. He writes:

I detest laws that restrict freedom of speech. Apart from anything else, like banning drugs they only exacerbate the problem... Let him speak and ignore him, I say. Show your contempt by saying nothing."

There is not a widespread majority wanting to spread hate the way there is wanting to use drug - and if there were, Ruse might be singing a different tune. But from the perspective of one who has run discussion forums, it sometimes _seems_ like there's that many people spreading hate, and I can tell you surely, letting them speak and ignoring does not make the problem go away.

The problem is, hate speech is like poison. It contaminates and ruins any discussion into which it infiltrates. Think about how far you read into YouTube comments before turning away repulsed at the misogyny and hatred. Nobody lingers for a discussion in a forum filled with Nazi propaganda. The attack dogs of the neo-right have perfected the art of destroying public places with hatred.

I support the Canadian approach: shut it down. Even more, I am inclined to shut it down more quietly - filling the newspapers full of Ernst Zundel's opinions doesn't help anyone. On my own website I remove the comments silently and without explanation. If you don't like my policy, start your own website.

The point is, hate speech is not free expression. The utterance of hate speech is an _act_, just as surely as striking a blow or shooting a gun. And this is something Ruse, who is a philosopher and must surely have read J.L.Austin, must know. Hate speech is the manipulation of bits or print or sound waves not with the intent of creating dialogue or meaning, but with specific intent to shut down, to hurt, to destroy.

Anyone who has run a discussion forum knows this. They know that people on the forum are not 'more free' when someone starts venting hate, they are less free, because the entire forum is poisoned. They know that ignoring the hateful will lead only to a hundred more hateful posts. They know you can't argue with hate, can't reason with hate, because hate is just another manifestation of the barrel of a gun. That's why they kill spam and hate speech before it gets out of hand. And that's why I say that Ruse speaks with knowledge, but without experience.
Email Post