Props to New Scientist for highlighting this report, which identifies a network of 147 tightly clustered entities that control 40 percent of the world's wealth. The top 20 included Barclays Bank, JPMorgan Chase & Co, and The Goldman Sachs Group.

Here's the direct link to the study, found in PloS One: The network of global corporate control

From my perspective, not only is the concentration of ownership exceptionally dangerous (as Cory Doctorow says, "one disaster could sweep like wildfire across them all") it is also deeply undemocratic. These companies and their directors answer to nobody, and there is no electoral process to unseat them. Asserting pressure economically is also not an option; these people are the economy.

So long as they have allowed sufficient wealth to the rest of us they have been left alone, but with the world's resources being depleted and environmental change impacting economies, they are increasingly on a collision course with the world's poor - the 99 percent of us who do not have a say in how these companies are run and who do not share in their wealth. 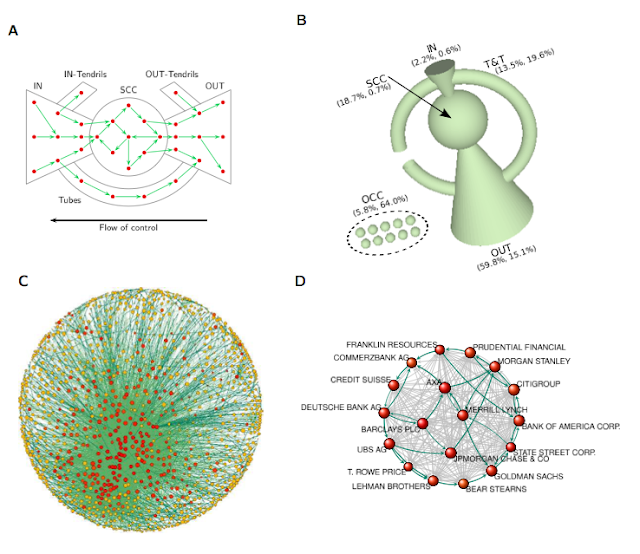 "The idea that a few bankers control a large chunk of the global economy might not seem like news to New York's Occupy Wall Street movement and protesters elsewhere (see photo). But the study, by a trio of complex systems theorists at the Swiss Federal Institute of Technology in Zurich, is the first to go beyond ideology to empirically identify such a network of power. It combines the mathematics long used to model natural systems with comprehensive corporate data to map ownership among the world's transnational corporations (TNCs).

"From Orbis 2007, a database listing 37 million companies and investors worldwide, they pulled out all 43,060 TNCs and the share ownerships linking them. Then they constructed a model of which companies controlled others through shareholding networks, coupled with each company's operating revenues, to map the structure of economic power.

"The work, to be published in PloS One, revealed a core of 1318 companies with interlocking ownerships (see image). Each of the 1318 had ties to two or more other companies, and on average they were connected to 20. What's more, although they represented 20 per cent of global operating revenues, the 1318 appeared to collectively own through their shares the majority of the world's large blue chip and manufacturing firms - the "real" economy - representing a further 60 per cent of global revenues."
Email Post