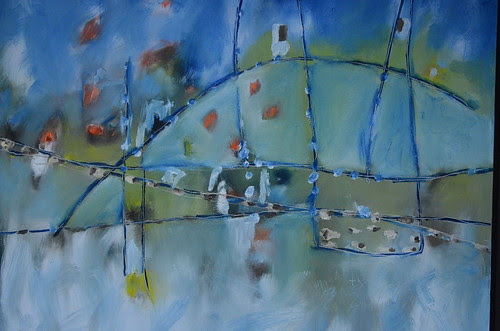 I got an email a few days ago inviting me to the launch of the Plan Moncton video and report at the City Hall Council Chambers at 4:00 p.m., so Andrea and I went down to take part, since we had been to the open house and contributed voluminously. I had also been quoted a couple times in the paper on things like a possible downtown pedestrian mall, so I was curious to see how it would all work out.

So, I'm still curious. The highlight of the Council meeting was not the video launch, which was, after a two-hour wait, something of a let down. No, it was the presentation by these Grade 2 students from Arnold H. MacLeod school on something called Yellow Fish Road, which consists of a plan to paint yellow fish and the slogan 'rainwater only' around storm sewers. It's a good idea, though I'm somewhat uncomfortable with all the corporate sponsorship. No matter; the kids were great, and it was interesting to see the point they had raised surface in later discussions aboutr subdivisions and zoning.

Ah, subdivisions and zoning. Two hours of it, before they showed us the Plan Moncton video. Probably the best was the presentation from the Moncton Vision Lands people, which on the whole is a good concept, though they're trying a little too hard to create features of suburbia alongside urban villages (the Plan Moncton video was all about urban villages too, though I don't recall reading anything about that in the hundreds of comments I looked through).

The worst of it was a subdivision being planned out near Magnetic Hill that followed (so far as I could tell) none of the lessons being applied in the 'vision lands'. So far as I can tell, the deal was that they would build the subdivision before the water main was extended out to them, not after. Then there was the rezoning of some industrial land that we were assured would not make any changes in the use of the land, and probably wouldn't result in the value of the land going up. Uh huh. And the rezoning to allow for the development of an apartment building right behind the Pizza Delight on Mountain Road.

So all this happened before we saw the Moncton Plan video. Leaving me to wonder what the point of the exercise was. But at least we got to see the Yellow Fish Road kids, which, as I said, was the best part.