Responding to the enquiries posted to this blog post. Originally intended as a comment, but Blogger very arbitrarily limits the size of comments, and I can't seem to change that.

I honestly don't think that most people think of the definition of 'group' when they use it, beyond the obvious connotations of 'more than one person'. When I've asked people, they typically talk about what the members have in common, rather than links between members. So I'm not sure whether my use is in fact an unusual definition of the word. It may be that when critics evaluate their definitions in the light of what I say, they find the same issues, but rather than abandon their use of the word 'group' they reconceptualize it. In any case, the fact of the matter regarding the common meaning of the word 'group' is a matter for empirical study. For myself, I am much less interested in pushing for some sort of commonly accepted definition of the word as I am in getting at the underlying concepts - 'associations based on sameness' vs 'associations based in interactivity'.

On the matter of convergence of vocabulary, I admit that this proposition was the one that gave me the most pause as I wrote the post above. Is progress generated by convergence on common vocabulary or method, etc?

As with everything, it depends on what you mean by 'progress'. It seems to me that many people define 'progress' (if only implicitly, and at least in part) as 'convergence on method, vocabulary, etc'. In such a case the proposition becomes tautological - 'the generation of x results in P because P is x'. And as tautology, such a statement can be effectively removed from consideration.

Therefore, the underlying question is, "does the generation of x result in P for cases (or instances) where P is not x?" Does commonness of method or vocabulary result in progress where progress is *not* defined or composed in some way of commonality of vocabulary or method, etc.? That is a much harder case to be made, and my assertion in the post above is essentially the claim that the case cannot be made.

Why would I say this?

Well, let's look at what 'progress' is a property of, and let's look at what 'commonality' is a property of. 'Progress' is a network phenomenon - it refers to the success of the entire network in obtaining some result. In the case of a social network, 'progress' describes the advancement of society. In the case of a neural network, 'progress' describes the advancement of the person.

Now, being most precisely described, we can identify a clearer role for 'commonality', or as I'll more accurately describe it here, 'sameness'. There are two key roles:

1. 'Sameness' of neural state as regards learning theory. Instances of Hebbian associationism ("what fires together, wires together") imply that some aspect of a neral state must be the same for two neurons (ie., firing) in order for a connection to be formed. But note that this kind of sameness applies not to an internal sameness - it doesn't matter *what* caused the neuron to fire - but only external sameness.

2. 'Sameness' as regards physical substrate required for the possibility of communication. If entity A is a neuron and entity B is a donkey, they are not connecting with each other, because the one does not have the capacity to receive signals from the other. A *physical* compatibility is required for communications. But note that this is a very distinct type of commonality, requiring only *fit* and not identity. A lightbulb need not be the *same* as the socket to connect, only compatible. That said, there are some properties that are indeed the same - 'diameter' and 'thread size', in the case of a light bulb, for example. I've discussed this kind of sameness before. I call it "syntactic" sameness, as opposed to "semantic" sameness - a sameness that addresses only the structure, not the underlying meanings. 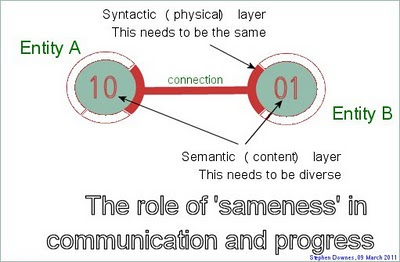 Applied to social networks, these two types of sameness amount to (1) expressions or external behaviour, and most significantly, productions of external artifacts. This sort of sameness is the sort that allows for stigmergy. And (2) uses of the same physical medium - spoken word (and the shape and structure of those sounds), written forms, etc. Note that two people can 'communicate' even if they have different 'meanings' (or 'truth values', etc) for two words, provided that (a) they behave the same way when the words are uttered (aka 'language games'), and (b) they use the same words.

All of this has led me to devalue what we think of as a 'common vocabulary', in any ordinary meaning of the term. If we do the same performance with the same entities, it doesn't matter what we think about those entities. You have your interpretation, I have mine, and the world goes merrily along until the inevitable divergence of performance.
Email Post