Networks, Neighbourhoods and Communities: A Reflection

In Friday's CCK11 Elluminate session I highlighted some of the properties of networks in the following diagram: 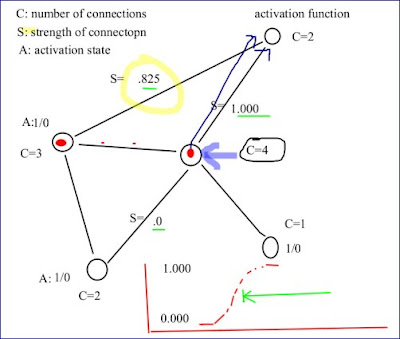 Now this isn't the most official diagram in the world, but it suffices to highlight some of the properties of networks we want to include in our discussions. First, there are the two major parts of a network:

Within these collections there are various properties that parts of a network may possess.

The node, for example, may have the following properties:

- the activation state - that is, the current state of the node, which may be off or on, 1 or 0, excited or at rest, etc. The activation state may be very simple, or may be a combination of a large number of factors, depending on the complexity of individual nodes.

- the activation function, that is, a description of what sort of combination or type of inputs is required in order to switch the node for (say) 'inactive' to 'active'. Activation functions may be expressed in terms of signal strength, the type of signal, or the number of signals being received. It may be an absolute value, a probability function, or some other type of function.

The link, meanwhile, may also have various properties:

- the type of connection, for example, 'friend', 'neighbour, etc. or nature of the interaction

- the number of strands in the link, which may be seen as a combination of different types of links, of different intensities

From this perspective, we now turn to the analysis of communities as networks, and in particular, I'll turn to Barry Wellman and Barry Leighton's "Networks, Neighborhoods and Communities, from Urban Affairs Quarterly, 14 March, 1979 (thanks, George, for the suggestion).

What Wellman and Leighton are trying to show in this paper is that traditional network discourse would be more effective were it expressed in terms of networks. They cite a variety of literature that examines the nature of communities in urban settings, noting that these analyses have their own frames and vocabularies to describe these communities. And they ideantify three major types of arguments in the literature:

- the 'community lost' argument - this is the argument that increasing urbanization has weakened communities. "Lost scholars have seen modern urbanites as alienated isolates who bear the brunt of transformed society on their own."

- the 'community saved' argument - communities form regardless of the circumstances. Humans are fundamentally gregarious and "Densely knit, tightly bound communities are valued as structures particularly suited to the tenacious conservation of its internal resources, the maintenance of local autonomy and the social control of members.

- the 'community liberated' argument - "people are seen as having a propensity to form primary ties... out of utilitarian ends." These ties may not be local or geographically based, but tight-knit communities nonetheless exist.

Now consider how Wellman and Leighton cast each of these three theories in network terms:


(a) Rather than being a full member of a solidary community, urbanites are now limited members (in terms of amount, intensity and commitment of interaction) of several social networks.

(b) Primary ties are narrowly defined; there are fewer strands in the relationship.

(c) The narrowly defined ties tend to be weak in intensity.

(d) Ties tend to be fragmented into isolated two-person relationships rather than being parts of extensive networks.

(f) The networks are loosely bounded; there are few discrete clusters or primary groups.

(h) The narrowly defined ties dispersed among a number of networks create difficulties in mobilizing assistance from network members.


(a) Urbanites tend to be heavily involved members of a single neighborhood community, although this may combine with membership in other social networks.

(b) There are multiple strands of relationships between members of these neighborhood communities.

(c) While network ties vary in intensity, many of them are strong.

(d) Neighborhood ties tend to be organized into extensive networks.

(f) Neighborhood networks are tightly bounded, with few external linkages. Ties tend to loop back into the same cluster of network members.

(h) The multistranded strong ties clustered in densely knit networks facilitate the mobilization of assistance for dealing with routine and emergency matters.


(a) Urbanites now tend to be limited members of several social networks, possibly including one located in their neighborhood.

(c) The ties range in intensity; some of them are strong, while others are weak but nonetheless useful.

(d) An individual's ties tend to be organized into a series of networks with few connections between them.

(e) Networks tend to be sparsely knit although certain portions of the networks, such as those based on kinship, may be more densely knit.

(f) The networks are loosely bounded, ramifying structures, branching out extensively to form linkages to additional people and resources.

(h) Some network ties can be mobilized for general purpose or specific assistance in dealing with routine or emergency matters. The likelihood of mobilization depends more on the quality of the two-person tie than on the nature of the larger network.

Now what is important here is not whether one or another of these descriptions is true or accurate - this is a matter of empirical investigation. Rather, what is significant is that through the use of network terminology, we can precisely formulate these theories into a set of contrasting alternatives, the dimensions of which may be easily viewed and understood.

So much discussion in the field of education is based in loosely defined terminology and concepts. Take, for example, the advice to 'form community'. There are many things this advice could be manifest as, including any of the three accounts of community given above, and a wide variety of other permutations.

Typically, the advice to 'form community' is understood as advice to form solidary activities and sentiments - what I would in other works characterize as groups - but which here may be more precisely understood as actions undertaken in unison ('collaboration') and sentiments held in unison ('commonality'). But of course such exhortations are only one way communities can organize, and not even the most effective ways. But there is always no shortage of people - Larry Sanger, Jaron Lanier, Sherry Turkle, to mention a few raised recently - ready to lament the 'lost community' or 'techno-groupthink' in technology-based education.

What do these criticisms mean? What is their validity? Rather than use prejudicial and imprecise vocabulary, we can examine what it is about technology-supported learning and its proponents that bothers these authors. Perhaps it's all about a sentiment of community lost, as defined above. In such a case, we can respond to it meaningfully, with clarity and precision.

Or take the discussion of 'interaction' in online learning. While more interaction is typically lauded as better, we tend to be sharply limited to narrowly defined notions of interaction - perhaps Moore's formulation of learner-content, learner-instructor or learner-learner interaction. Or maybe Anderson's more sophisticated formulation of the same idea.

But if we can approach the concept of 'interaction' from the network perspective, allowing for the existence of many types or strands of interaction, many degrees or strengths of interaction, various interactive media, and more (as I tried to explain in this series). Again, the point is that we can use network terminology to explain much more clearly complex phenomena such as instruction, communities and interaction.

Wellman and Leighton's paper was written in 1979. It is well-worth anyone's while to look at more recent work to appreciate the depth and utility of network analysis.
Email Post