CChat stands for 'Conference Chat' and it's the backchannel application I have been using since 2007. I first used it at two conferences in California, Brandon Hall in San Jose and AECT in Anaheim. You can see the backchannel in action in the video of my talk at George Mason in Fairfax.

I've had mixed results with the backchannel - people weren't always polite, or on topic - but on the whole it worked pretty well. But I got complaints from people who would rather use Twitter, and I had one backchannel for everything. So I have had in mind for some time to upgrade it. Hence, the new backchannel.

Let me explain the concept. The idea is, at a live event, such as a conference presentation or speech, people can send messages to each other and comment about the presentation. Normally, this would happen in secret, but it's more fun if you take the conversation and put it up on the screen. Here's an example of one using Twitter, at right.

This image is an Open Back Channel picture from Guardain Activate09, source rooreynolds.com. I found it posted on an article by Jeff Hurt called Ten Reasons Why You Should Use a Backchannel at Your Conference.

In reality, a backchannel is nothing more than an internet chat discussion. It works the same way: you join the chat, you post messages to the chat, and you read messages from other people at the chat. The only difference is, you're doing this at a live event, and (properly) talking about the event.

First of all, you can use it for your own backchannel at your own talk. I've set it up using gRSShopper, so anyone who is a registered user on my website downes.ca can set up their own backchannel. I haven't imposed any limits, so you can set one up and start using it right away. As well, you can join anyone else's backchannel.

All this is possible from the backchannel entrance page. I call each backchannel a separate 'thread', so the start page allows you to select or create a thread. Here's what the page (at http://www.downes.ca/cgi-bin/cchat.cgi) looks like: 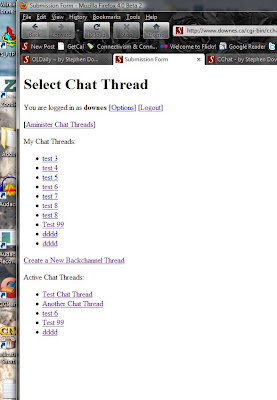 Select 'Create a New Backchannel' to make a new backchannel: http://www.downes.ca/create_backchannel.htm It looks like this:

The chat thread itself is composed of two major parts. The first part is the display screen, on which you see the messages. The second part is the input form, into which you type your messages.

Which takes you to this: 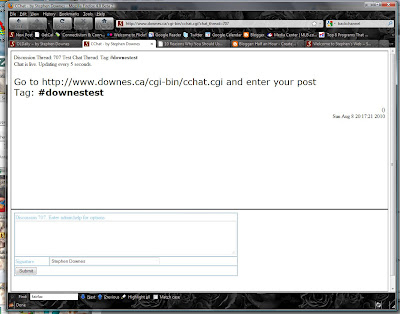 This display, though, is intended mostly for desktop or laptop computers. It isn't useful in other contexts.

The display on the screen at the front of the room, for example, should only show the messages, not the form. So the computer attached to the digital projector should point to:

Meanwhile, the display on devices like mobile phones, iPhones, iPods, and other small mobile input devices should consist of the form only. There just isn't room on these screens to show the whole display. Also, if you want to limit the load on the server and on the room internet, it is better to have people load only the form. The URL for this is:

This way, participants can enter their comments into the form and see them on the screen at the front of the room.

One thing that makes CChat different from other systems is that it shows only one comment on the screen at a time. Thus, what it does is to accept incoming comments into a queue, and then to display them one at a time. Each comment is on the screen for a certain period of time, the refresh period, and then the next comment is displayed.

For people who have come in late, or who want to review comments that have already been displayed, each thread has an archive. The format for the archive is consistent with that for the display and the form:

If you create your own chat thread, you are automatically the administrator. As administrator, you can customize your backchannel discussion thread.

To enter a command as an administrator, you simply type it into the comment form. The system will recognize that you are an administrator and will be listening for your commands. You can also set thread parameters from the editing window you see after you have created your thread.

Backchannels are not like ordinary chats in that they are not running most of the time. By default, the backchannel is hidden and inactive. Even when people can see it, the messages are paused. In order to start using the backchannel, an administrator must enter two commands:

By default, each message displays on the screen for 10 seconds. Sometimes this is too quick, or too slow. It really depends on the audience. The administrator can change the refresh rate with another command:

This would set the refresh rate to 20 seconds.

By default, text displays on the screen at 36 points. Again, this may be too large or too small for the display. Accordingly, the administrator can change the default text size:

This would set the text size to 40 points.

Even though there is a perfectly good input form, some people still prefer to use Flickr. This may be because they are using a Flickr client on their mobile phone or desktop, or because they just like Flickr.

CChat automatically searchers Flickr for content relevant to the current thread. To set this up, the administrator should define a custom tag for the backchannel.

This would set the tag to '#downestest'. Following this, CChat will search Flickr in real time and retrieve any Twitter post using the tag. It will bring them in and add them to the queue, They will then be displayed as though they were ordinary chat comments.

Eventually, I'll take posts submitted through the chat form, tag them, and send them to Twitter - I don't do this yet, though. Watch for an update.

I plan to create an admin panel, so admins don't have to enter commands. As mentioned above, I want to create a Twitter 'send' capacity - it's easy to do, but I'm not so sure I want to send them all under a single user name, but I don't want to collect users' usernames and passwords. Also, I want to set up options to allow administrators to restrict entrance into the chat, and to have private chats. Finally, I'd like to support other input mechanisms (not sure what, though - instant message?).