Harold Jarche weighs in with a much improved version of the model describing personal knowledge management, which now has these as intermediate stages between gathering and distributing:
- Filtering (separating signal from noise, based on some criteria)
- Validation (ensuring that information is reliable, current or supported by research)
- Synthesis (describing patterns, trends or flows in large amounts of information)
- Presentation (making information understandable through visualization or logical presentation)
Customization (describing information in context) 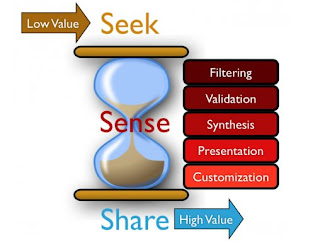 That said, while this is a much better model than this, I think it stays true to the original 'filtering' vision, where you go from data to wisdom through successive filtering processes. And while there are different ways to think of knowledge - processed, procedural, propositional - this model I think adheres to a more basic view.

Here's what I think. The picture being presented by Jarche and his colleagues adhere to a 'mining' model of knowledge management (from which we get phrases like 'data mining'). But it's just one perspective, and arguably not the best. It should be contrasted with some alternatives:


The different approaches each stress different aspects of knowledge (or, arguably, are the result of different stresses).

The mining approach stresses accuracy and purity. Getting the right data, getting accurate data and validating data are of critical importance. It is an approach that is going to focus of 'best' - as in "best practices" - or on demonstrated reliability.

Finally, the growth approach is focused on creation and creativity. The 'knowledge' produced from the input is contained in the state of the system as it grows and produces. The flower that absorbs water and nutrients from the soil, carbon from the air and genetic information from the seed produces new knowledge in the form of a flower that reflects all three of those inputs as they are organized into complex and interactive living systems.

The organic model is the only one of the three in which knowledge and wisdom are not 'outputs' of the process, the only one in which knowledge and wisdom remain as properties of the knowing system. The flower is not the 'knowledge' of the flower, it is an artifact that serves a purpose - to attract bees, to assist propagation, to beautify a house, to feed a cow - and from which the knowledge that is contained in the plant can only be inferred.

The organic model is also the only model in which there are not 'consumers' and 'producers' of knowledge and wisdom. In the mining and construction models, the output of the system is some sort of refined or constructed product, which is then in turn consumed by some knowledge-seeking agent. However, according to the organic model, each agent is the sole source of its own knowledge, and it cannot pass along that knowledge per se, but rather, passes along artifacts, such as flowers or seeds, which can become the raw material for other entities in the system to create their own knowledge.

By contrast, the first two approaches will focus much more on information and literacy skills. Because the process of producing knowledge and wisdom from data is essentially transformative and evaluative, an emphasis on those capacities is required. As Brodie and Brodie argue, citing Laurillard, "the more enduring qualities are the skills, attitudes and ways of thinking derived from the course."

In the case of human knowledge, of course, elements of all three models are present. We filter and refine, we build and represent, and we grow and create. And aspects of each inform elements of the other.

Filtering, for example, is not merely a matter of selecting the best and purest. It is also a matter of selecting the most salient, the most relevant and the most important. We filter naturally, as when the senses ignore extraneous information to present us with a world of objects, sounds and shadows. And we filter deliberately, when doubting a testimony or refusing to be fooled by a mirage. Filtering and refining are matters of growth and learning, which is why a vintner can detect differences in wine that would elude a casual wine-taster.

Constructing and representing depend not only on our natural ability to associate one object with another in our minds, but on our ability to filter and select those properties worth representing. The logic of semantics allows for infinite was of describing the world, but in fact we agree upon roughly consistent sets of properties and objects, with words and phrases to describe them. Semantic ability, again, while manifest in the artifacts, such as words and descriptions we share with the world, is actually located in the brain (some even say innate in the brain).

Growth and creativity, meanwhile, would be futile without some means of selecting and filtering resources, and meaningless without some way of creating representations and constructing meaning. Even the flower, which attracts the bee, acts in a representative manner; the flower, to the bee, means nectar. The association present in the bee's memory is what makes the representation possible, but the plant, too, depends on that representation in order to attract the bee to help it spread pollen. A creative act is never a random act, never a pointless act; it is always informed with a sense of refinement and purpose.
Email Post