Inspired by Dough Peterson's My Childhood Community, I have collected some Google Street view images from my old home town. Here is where I grew up, the small town of Metcalfe, Ontario, about a half hour south of Ottawa. I was here from Grade 4 (moving from a suburb of Montreal) to Grade 12 (ages 10-18). 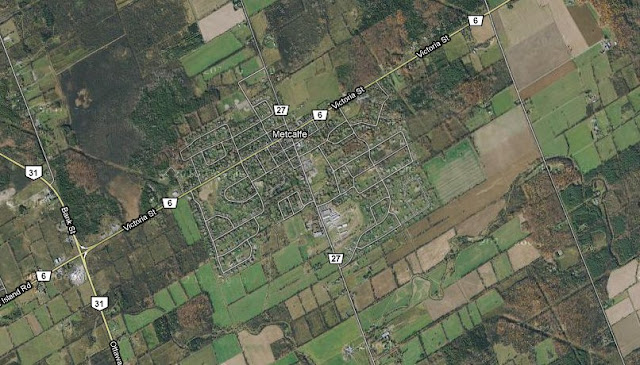 As you can see, Metcalfe is a small farming community. It is about twice as large now as when I gre up. The forest to the north west of the town was a source of adventure, as was the creek that flowed though the centre of town and out to the southwest.

Here is where we lived: 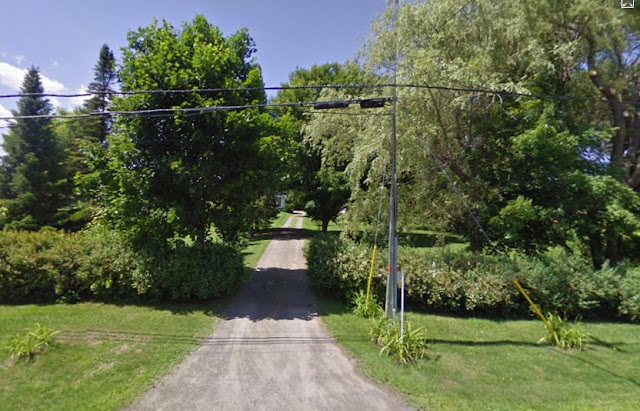 You have to look closely but there's a house down that laneway. It has white aluminum siding and red shingles. We put that on when I almost burned the house down in 1974 or so. That's when we expanded the original 100 year-old farmhouse (I guess it's 140 years old now) to include a new living room and more bedrooms - and added insulation so we wouldn't need to use the wood stove. It looks like the big elm at right still survives. I almost died one day when, about 40 feet up, I slipped and almost fell.

I moved that front lawn more times than you can count. We had a baseball diamond on it, which my father and I built, backstop and all. I planted the hedge in front and many of the trees (my mother would have planted the rest).

Here is the Anglican Church that was just a few houses down from me. 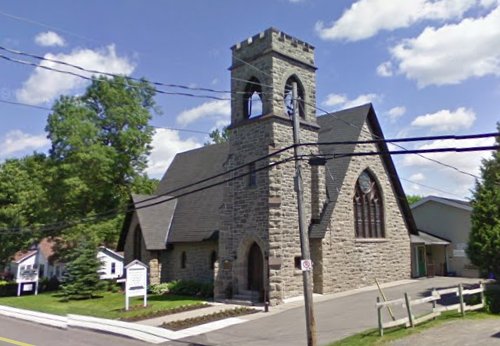 I went to this church for a bit, and was confirmed here, but it didn't really take and when they asked me to stop teaching Sunday School (my classes were heavy on Bible study, light on references to God) I drifed away.

My best friends, Charles and Harold Newin, lived in this old house across the street from the Church. It would have been an old rectory. They moved back to Ottawa in 1974 or so, which was sad for me. 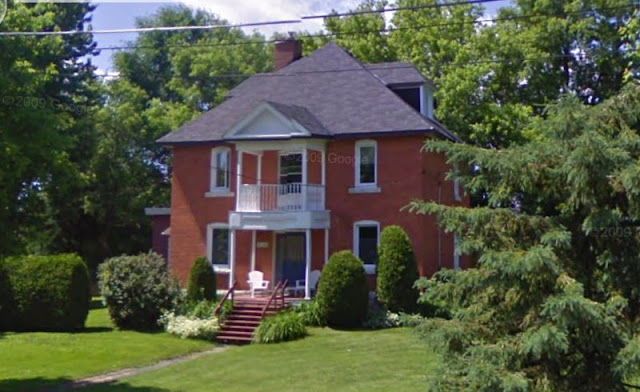 We were all enthralled by the creek, would dream of taking a raft down it (and made numerous rafts). We wrote stories about travel and adventure. If you look at the porch to the left (it's out of sight, you can only see the edge of the eave) you'll see a hollow in one of the steps created by a rocket I built and launched there.

This is downtown Metcalfe. 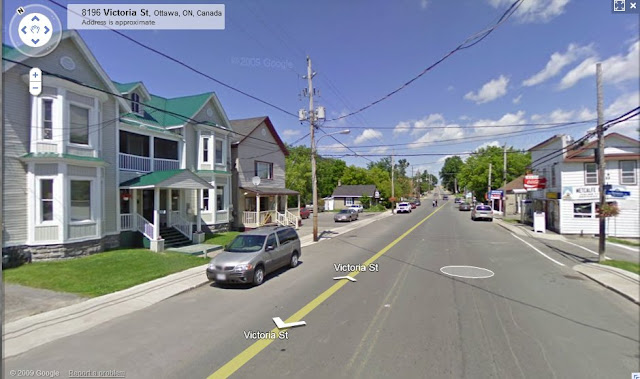 The store on the right with the Coke sign was Anna's Confectionary. Anna was a tiny 80-year-old woman who ran the store and was taken advantage of by all the other kids (not me though, I really liked Anna and she once let me in the back to see her house, which looked like it was from the 1880s). After Anne died it became Metcalfe Pizza and a new coat of paint covered the spray-painted (no doubt by a customer) "Anne's" on the side.

The double building on the left had apartments in it. I knew a few people in that building over the years. One girl, Kathy, lived there and was in my class when I was in grade 4. her family moved away - and she showed up 30 years later as the wife of one of my colleagues at NRC who lives in Fredericton. Small world.

Beside it, the single house with the proch, was the location of Bab's Groceteria (Bab's standing for Betty Allan Barry). I liked Bab's and would go there for groceries. I once begged them for a job, and was finally given a position sorting a huge pile of buttons, which lasted about two days.

The vacant lot losted the "brick block", an apartment block that was abandoned even when I lived there. I drank my first alcohol in the Brick Block (caribou, a mixture of white wine and vodka) and had my first, um, intimate moments there. 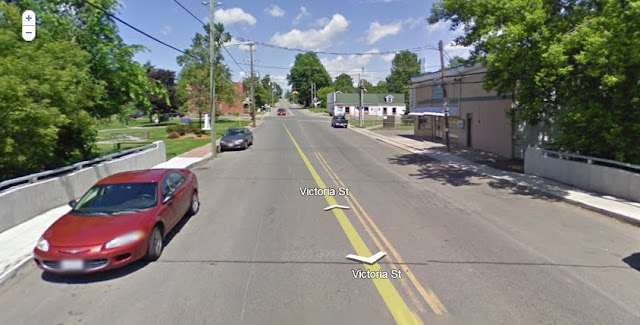 This is the rest of downtown. The bridge over the creek is new - it had green-painted metal railings when I was a kid. To the right just after the bridge was Stanley's Store, which I also liked. It was kind of half way between Bab's and Anna's - lots of candy, but groceries too. On the left the houses have been removed and the town now has Albvert Bouwers's park (he is the Reeve who built it) complete with a completely useless  little bridge over the creek. Bouwers lived next to us and his family - like a lot of people in Metcalfe - was from Holland. One thing they brought with them was an inclination to build little gardens, bridges, and perfectly manicured landscapes.

The store with the Green roof at the corner of Victoria and Alberta was MacLaren's Grocery. Don MacLaren was a non-nonsense business owner who catered mostly to the farmers in the region and didn't put up with any nonsense from us kids. So I didn't hang out there at all and didn't like it.

The brick building across from MacLaren's was a hardware store, but it had closed even before I moved there.

Up the road a bit was the Township Hall. 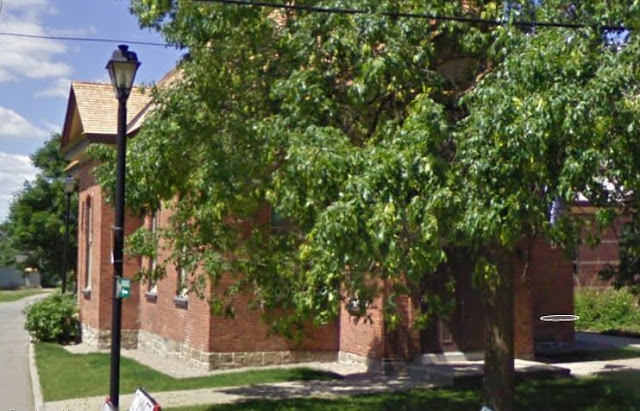 The library was around back, and that's where I went in. It was a tiny library and I read a good proportion of its collection, including my first science fiction books, including John Christopher's series, The White Mountains, and Arthur C. Clarke's A Fall of Moondust.

Going up Albert Street (now called the Eighth Line Road) we see the United Church on the left. 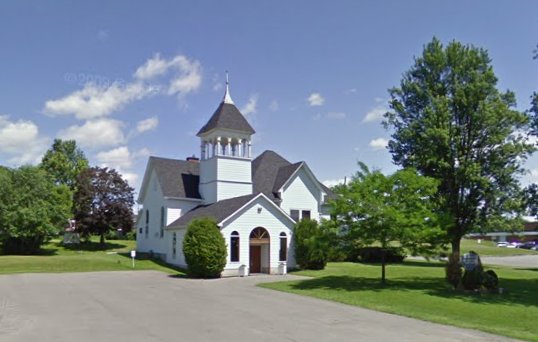 A block up Alberta Street was Metcalfe Public School. 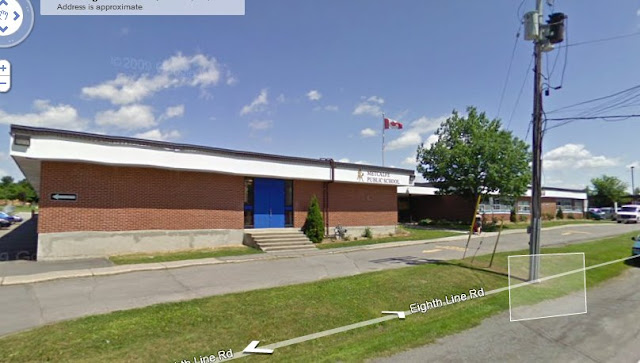 It looks the same today as i did when I first started attending it in 1968 (though I have some memory of an expansion to the back, to replace the portable classrooms, like the one I was in in Grade 5).

The office was in the centre recessed area, and when you go on those doors (I never did, I went in the blue doors) you will see a trophy case. You might see my public speaking prizes from 1970 and 1972.

Just up Albert Street we see the Separate school, St. Catherine's School, and across from it, St. Catherine's Church. The priest lived in the house on the near side of the church. He is the one who told me about football.

Further up Albert Street we see the Metcalfe Community Centre. It was originally a wooden barn-like structure, but it burned down one night after a social event. But they saved the ice-making plant, by far and away the most valuable part of the building. The new community centre took the entire resources of the Village to build, and was built during the winter - that's how important it was. One of the walls collapsed when it was being built and a man died.

I spent a lot of time in the Community Centre. I played all my hockey there. I was a Metcalfe Jets fan and attended all the games, even acting as a goal judge (until the day I called a close one againt the home team, and never acted as goal judge again - but I can see it today as clear as day, the puck was over the line, and was scooped out by the goalie).

Beyond it is the Curling Club, looking like a mini version of the old arena. That's where I played my one and only game of curling (and won, leaving me with a perfect record).

Finally, Osgoode Township High School. The big sign on the gym wall is new, but otherwise it is as it was when I attended. Again, it was expanded while I was there to remove some portable classrooms. I went there for four years, always entering through the main door by the gym, past all the trophies and the OTHS double-blue society names. All that had been discontinued by the time I got there, so despite being an honour student, and winning various events (like public speaking, three more times) you won't see my name anywhere in the school. 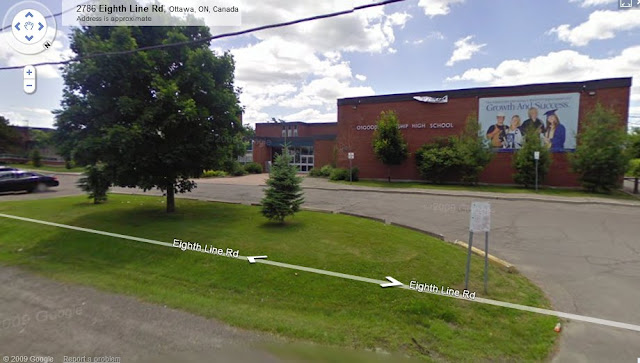