This is a blog summary of Michael Wesch at D2L Fusion.

We need to move students being knowledgeable to knowledge-able. This is not simply a technological revolution, this is a cultural revolution. 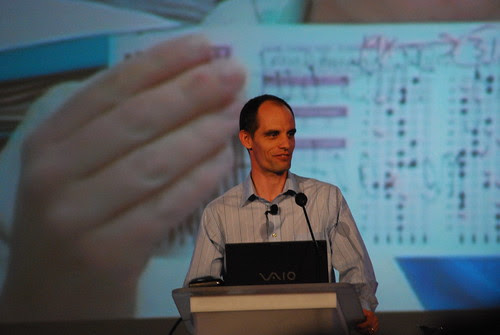 Let me give you an example from New Guinea to make the point. In little villages here I spend a lot of my summers doing research. There's no internet, no 3G - and no running water and no money. They are basically living on subsistence agriculture.

Showed a picture of a snake that was captured a few hundred feet away. Would wrap my red sleeping bag around myself - my "Little America" - protecting myself from everything in New Guinea. Story about mistaking his own arm for a snake.

Culture shock: complete loss of self. Your clothes don't say anything about you, you can't communicate anything. There's no way to express self; the entire sense of identity is built up with face-to-face relationships.

This was happening to me, and at the same time, to this village, writing came in. It arrived in the form of census blocks, etc. Each house was numbered, the houses were rebuilt in numerical order. They asked people their name, they found many people who had no name. In a small village you would be 'mother' or 'sister' or 'friend'. It was all relationships. Then they got names, they began to think of themselves as object. They called this 'numba-talk'. Everything as a number.

I use a computer but not for class. I buy a textbook I never read. I miss classes I paid for. 49 percent of the reading are completed. This is a failing grade. It's not just the generation - compare the excitement they have for American idol. We see people (via a quote) people trying to escape the anonymity of civilization. Ah - but the quote is from henry Candy, 1920s, about city life.

This traces back to the assembly line. To suburbia, where people are disconnected, except by roads and televisions - the TV has become the nexus of our culture. Every conversation of significance happens there. It's a one-way conversation - you have to be on TV to have a voice. No wonder there's a clamour to be on American Idol.

The people from the "self-help generation" 70s are the people who are raising the reality TV generation. This is the people with the biggest media budgets, designing media just for you. By 1992 we have the beginning of reality TV.

It's not that "I am am against the system." It's that "I am the center of the world." Example from South Park (Cartman). The narcissistic "whatever". Jean Twenge. People are very self-centered, but miserable. They all think they will be the next American Idol, and then they're shocked when they're not.

Neil Postman, so when you're bombarded with the media - what do you plan to do about OPEC, etc. You plan to do nothing. You are disengaged partially because you're co impotent. But there's something in the air - this shift - you're not so disempowered in the online world. So it mught be suggested that there's this big change afoot now.

For example: YouTube. We've been studying this for three years. Clips that have hundreds of millions of viewers. There's playfulness, but it's seriously playful. remember the last election? John McCain thought he was just talking to a group of veterans - "bomb bomb Iran" - but it went onto YouTube - and then came the remixes. Or the Chevy Tahoe remixes. The generalized love and connection messages on a hand. It's not just fun, but there's a critical commentary.

This is the time to say "everything changes," right? But if I say that, I'm just another person in a long line of people who have said the same thing. After, eg. the blackboard, the cinema, the TV. He (Buckminster Fuller) imagines that this would end TV.

They say questions drive the learning. But we hear, "how many points is this worth?" "How many pages?" These are representations of the crisis of significance. We are missing things of importance.

I was trying to get a job. My job interview was to teach an anthro class with 400 students and teachers watching. And my wife told me about Diana Degarmo. She was talented, but inexperienced. She was horrible for the first three weeks, and then became a rock star and went almost to the end. They asked what happened. She said, her hairdresser said, "Love your audience and they'll love you back." Instead of focusing on self, she focused on the beauty of the audience and the whole event. And I allowed myself to do the same thing.

I never let that leave me. I would start with that. I would start with loving my students. And it's striking how much my teaching has changed in five years, as a result of that. It's basically about shifting form getting people to love you,. to you loving them. It has four parts (Fromm, 1956):
- caring
- responsibility
- respect
- knowledge

What falls away? the idea that information is scarce - everyone has information. Also, the idea of just following along falls away. Things like Wikipedia become possible. It takes the authority away from the teacher, the expert at the beginning of the room. It's not beyond discussion, iot's part of the discussion. And the idea of learning being to acquire information is seen as completely off-based. It leads us to converse and create, to create meaningful connections

Parker Palmer, The Courage to Teach. One way to is to think of objects of knowledge. As compared to creating a community around a (living) subject. You're not just engaging in the 'subject' of anthropology, but rather, questions that really drive humanity. I try to engage real problems. And you recognize and use the existing media environment. So that students can recognize it and harness it as well.

What do we do in anthropology. We create this artificial world. They are assigned to be an expert on some part of the world. These 200 students become experts on these specific location; they will know more about it than I do. That creates a network of expertise. then we create aworld history (this is a really complex world). then we meet in a big room and try to simulate the world. All this is recorded. It's analysed, edited, and we create this history, which we compare to real world history.

Of some people may have seen the video we did. We started on a Google doc, and we just started writing. After about 400 edits we came up with a script, which became a video. It was the most blogged-about video in the world for a month. In my smaller classes we do the same type of thing. We come together, we work as a team, leveraging this new media environment to create something together. Eg. this documentary video we created about YouTube.

Sudents are not just learning about this objective 'stuff'. They're learning to engage with each other. They're practicing loving and learning at once. And in doing all of this, we can move to a new version of "whatever", from "I don't care" to "I care, let's do whatever it takes."
Email Post