This is a summarization of a paper by Eric R. Kandel on the molecular and synaptic basis for memory, Genes, synapses and memory storage. Kandel won the 2000 Nobel Prize for this work. I was moved to write this after listening to a segment of CBC's Ideas program discussing the nature of learning and memory. At the end of the paper, I draw the inferences from Kandel's work to my own.

The problem of memory has two major parts:
The systems component - a history:The idea that there are multiple memory systems in the brain has a long history in the philosophy of psychology:Scoville and Milner's studies of H.R., a patient who had the medial temporal lobe removed, yielded three major findings:
This established the distinctions postulated by the philosophers. This distinction between types of long-term memory is now characterized using the terms: 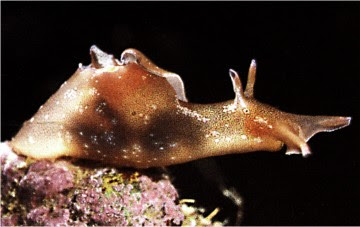 Kandel started by looking at the hippocampus but decided to focus on the simplest possible case, the marine snail Aplysia.

Why study Aplysia?
What they found (this is the key finding):This protein synthesis required to convert from short-term to long-term memory was developed early in evolution and hence preserved through all life forms, and is a general mechanism, responsible for both explicit and implicit memories.

Let's look at this in detail:

There are two major types of conditioning:
And two forms of learning:
In order to understand how the animal learns, therefore, "one needs in particular to work out the pathway whereby the sensory stimulus of the reflex leads to a behavioral response."

Kandel doesn't include the diagram from Mann at right in the paper, but it nicely illustrates the process. The little blue ots represent the release of glutamate.

Three major lessons are drawn from this work:
The growth of new connections

History of the distinction between short-term and long-term memory:

What's important is that there is a genetic basis for both the synthesis of the protein and for the consolidation phase.

Kandel notes, "Aplysia and Drosophila [a type of fruit fly] share some of the same genes and proteins for converting short- to long-term memory... creb has a role in learning in Drosophila that is similar or identical to its role in Aplysia, demonstrating striking evolutionary conservation. "

The mechanisms through which the proteins - CREB-1 and CREB-2 (aka ATF-2) - interact with the nucleus are complex and diagrammed (from Mann) at right.

In combination with other factors (such as, in the fruit fly, the the loss of a cell adhesion molecule), the interaction with the nucleus stimulates genes that results in the production of new synaptic connections.

Other work has demonstrated the plasticity of sensory systems. For example, experiments in kittens have demonstrated plasticity in the visual system. Cortical plasticity has also been demonstrated in adult monkeys. "These several studies suggest that long-term memory storage lead to anatomical changes in the mammalian and even the human brain much as it does in Aplysia."

A good example is the work done correlating the growth of synaptic connections and place memory. There are cells in the hippocampus, called pyramid cells, that are place cells - they fire when we occupy a certain place in our environment. So these cells form a cognitive 'map' of the environment. Various manipulations can lead to remapping, in which all the place cells change.

a. Learning and Memory

At this point we reach the end of Kandel's paper. What are we to make of these discoveries? What lessons should we draw?

For me, it requires a clarification of a comment that I have made on several occasions recently: learning is not memory. Kandel does draw a distinction (p. 31): "Learning refers to the acquisition of new information about the world and memory refers to the retention of that information over time." But what does that mean?
This is a difficult distinction because the two are so frequently found in the same location. Pyramid cells, for example, that contain a 'map' of the environment, are created through a process of remembering, as a result of the changes of synaptic connections in the hippocampus, but also represent (via the sensory impressions that cause those changes) distinct places in the environment.

This, in turn, tells us a lot about the reliability of synaptic networks, and hence, of networks in general. In reliable networks, the mechanisms that cause the creation of connections between neurons are meaning-preserving, that is, they represent memories, and not merely manipulations of the process.

(I am being areful about how I state this, because there will be different accounts of what constitutes 'meaning-preserving').

This suggests:
But this needs to be studied further. What constitutes meaning-preservation? It is not (as I'll show below) truth-preservation. But what is it? How do we measure for meaning, and not just syntactic compliance? Can knowing how learn help us determine what we learn?

b. Practice and Reflection

Again, as noted previously, learning is the result of repeated experiences of the same (or similar) type; the neural connections required for long-term memory will not be created without this repetition.

Learning is therefore not simply the presentation of information to an individual. It is not simply the transfer of a fact from one person to another. At best, this process could create only a short-term memory. In order to activate the neural connections necessary we need to stimulate the production of creb proteins, which happens only through repetition.

As I have said before, learning is not content. Learning is something over and above the pressentation of semantically meaningful information to a person. To learn, one does not simply 'acquire' content, one grows. To learn is a physical act, not a merely mental act.

Again, though, we want to look at this more closely. For example, what constitutes a repetition?

For example: the need for repetition would seem to suggest that a lecture would be a poor form of teaching, since it does not produce repetition. But:
I would suggest that the answer to each of these questions is 'yes'. But they are the sorts of things that bear further investigation.

c. The nature of knowledge and inference

There is a persistent school of thought in both the philosophy of psychology and also in educational theory that suggests that cognition is based on logical and linguistic rules, that there is a logical syntax that governs learning and cognition.

But what we learn here is that learning is associative, not propositional. That the mechanisms that govern this process are not expressions of truth-preservations, but are - at best - expressions of meaning preservation, where meaning has to do with sensory perceptions and states of affairs in the environment rather than abstract principles of logic and mathematics.

I have expressed this in the past as follows:

Our old understanding of logic, inference and discovery is based on universals:
– rules, such as rules of inference, or natural laws
– categories, such as classifications and taxonomies

Our new understanding, through, is based on patterns recognition:
– patterns, such as the activations of similar sets of neurons
– similarities, such as the perception of similar properties in nature

That is not to say that these universal principles play no role in our understanding. It means, rather, that we need to see them in a new light:
There's a lot more work to be done here. The nature of inference based on patterns and similarities is poorly understood. It is one thing to say things like 'an understanding of learning based on simple causation is mistaken' and quite another to describe the complex mechanisms that actually occur.

We need to dig into the logic of similarity, following the work of people like Tversky and Varela, to conjoin this with our understandings of social network theory and graph theory.
Email Post